How to Play Sequence 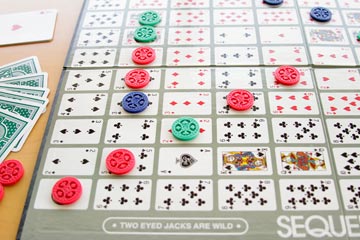 Here, the red player has nearly formed a diagonal sequence of five chips, but the green player blocked with a chip of her own.
Photo by Elizabeth Johnston/HowStuffWorks.com

One night in the 1970s, Owatonna, Minn., native Doug Reuter had a dream. And out of this sleep-induced idea, a game arose: Sequence Five. Reuter spent years developing the concept before entering into a licensing agreement with Jax Ltd. in 1981 to manufacture, distribute and sell Sequence and its subsequent variations -- which later became a contentious arrangement.

During a series of legal disputes (ongoing as of early 2012), Reuter has claimed that Jax violated its licensing agreement, which would provide grounds for contract termination. Jax, in response, denied any violation and has gained restraining orders that have barred Reuter from contacting its customers, saying that his actions were intended to disrupt Jax's relationship with them. Meanwhile, both sides continue to profit from game sales. Jax garners 80 percent of its revenue from Sequence; Reuter receives 20 percent of their income from Sequence as royalty payments [source: Reuter v. Jax Ltd. Inc].

Despite being at the center of legal wrangling, Sequence itself has changed very little throughout the years. Just as it did in the beginning, the standard Sequence game comes with two decks of cards (52 cards each). The game board depicts two of each card in the deck -- except Jokers, which should be taken out of the decks, and Jacks, which are wild (more about that later). The cards appear in a 10-across and 10-down grid on the board. In addition, there are 135 poker chips included: 50 blue, 50 green and 35 red.

Sequence can be played with two to 12 players. If there are more than three individual players, they should divide evenly into teams (up to three teams of four players). To begin the game, one player shuffles and each player cuts the cards. The player with the lowest card deals.

The player to the left of the dealer goes first. To play, you'll choose a card from your hand and place a chip on one of the corresponding spaces on the game board. The played card then goes face-up into a discard pile, and play passes to the left.

Each corner of the board has a free space that all players can use to their advantage. During your turn you can place a chip there (instead of discarding a card to place a chip as usual) -- but so can an opponent during his turn, even if the corner has already been taken. Making things even more interesting, Jacks are wild: Two-eyed Jacks can represent any card; one-eyed Jacks can remove an opponent's token.