The many names of this card game -- Chicago, Saratoga, Newmarket, Stops, Boodle, and others -- show its far-reaching appeal. Though played with cards and chips, Michigan doesn't involve betting. Here's how to play:

Number of players: Three to eight

Object: To win chips by being the first player out of cards and by playing money or boodle cards.

To play: Distribute an equal number of chips to each player. (Number agreed upon by players). Place the four boodle cards face up in the center of the table, where they remain throughout play. Each player puts one chip on each boodle card except the dealer, who places two chips on each.

Deal all the cards out, one at a time, dealing one hand more than there are players. The extra hand, called the widow, is dealt to dealer's left. It's all right if some players have one more card than others.

As dealer, look at your cards and decide if you wish to exchange them for the widow (without seeing it first). If you prefer, keep your original hand and auction the widow, still unseen, to the other players. The auction begins at one chip. The high bidder wins the widow hand and must play it and pay the dealer.

The player at dealer's left leads his lowest card held of any suit. Whoever has the next card in sequence in that suit plays it, and so on, until no one can play. For example, the 4 is led, the same player also plays the 5, and then other players follow with the 6, 7, and 8. No one has the 9, a stopper, so whoever played the 8 now continues play, leading the lowest card of a different suit.

When an ace is played, the sequence ends. Begin a new sequence with your lowest card in another suit. Whenever you play a boodle card, collect the chips on it. If you play your last card, the deal ends and you win; collect one chip from each player for every card remaining in their hand. The lead passes to the next player when no one can continue the sequence and the last player lacks another suit to lead.

Leave all uncollected chips on the boodle cards. The deal passes to the left, and all players put another chip on each boodle card. Since the dealer has an advantage, the game ends after an agreed number of complete dealing rounds. Whoever has the most chips is the winner.

Tip: If you take the widow, remember the cards you threw away. This can help a lot in the play.

Variations: One version of Michigan requires that players pay an extra penalty if they are caught at the end holding a boodle card. Another variant adds a fifth boodle, usually the sequence 9-10-J. Anyone playing two of these cards in a row collects their boodle chips. You can always use an A-K-Q-J of different suits for boodle cards, but if you use the 9-10-J sequence boodle, it should be the same suit as the ace.

For a complete listing of card terninology, click here. 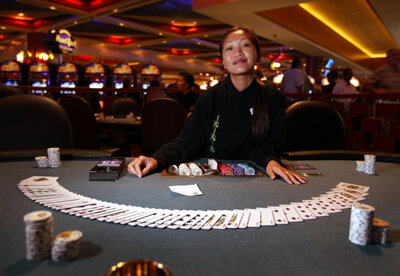 How to Play Poker in a Casino 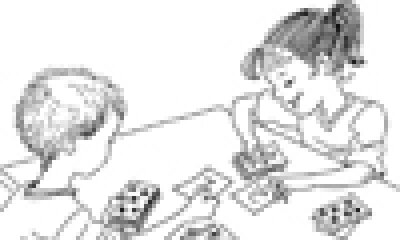