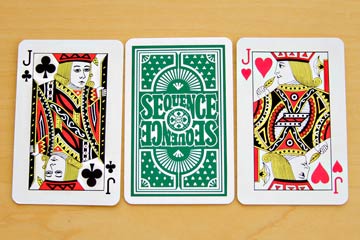 Two-eyed Jacks are wild -- one-eyed Jacks let you remove a chip from the board.
Photo by Elizabeth Johnston/HowStuffWorks.com

Fans like Sequence because the rules are easy to understand, but the gameplay can be complex. This is especially attractive to people who don't want to spend hours reading a rule manual, but who do want to embark on a challenging quest to beat an opponent. Sequence is recommended for ages 7 and older, which makes it a game that both children and grandparents can play (as well as other generations in between). Plus, it won't take all day to finish; a typical game only takes about 30 minutes.

After you've mastered the basic concept of Sequence, there are few additional rules you'll need to learn -- dead card, loss of card and table talk: