This widely known solitaire card game gives you a chance to put on your thinking cap. The name comes from the gaps left in the layout once play begins. Here's how to play:

Object: To end up with four 12-card rows; each one should be a complete suit in sequence from 2 through king.

The cards: A regular 52 card deck is used.

The layout: Deal out the whole deck in four rows of 13 cards. Then take the four aces out of the layout and put them aside.

To play: You may fill any space with the next higher card to the card at the left of that space. For example, if a space lies to the right of the 10, take the J from its present position and fill that space. This will leave a new space where the J was.

Fill an empty space at the left end of a row with any deuce. A space behind a king cannot be filled. But if you're able to move that king behind its proper queen, the space may open up again.

When all four gaps are behind kings, card movement is blocked. Gather up all cards in the layout that aren't in their correct sequence behind deuces. Shuffle up these cards and the four aces, then deal the cards to fill out the four rows. Remove the aces as before and proceed with the play. If this layout gets stalled too, you're allowed one further redeal.

Tips: Usually three or four plays are possible at the start of a game once you remove the aces, each opening up a series of further moves. You may see that some plays will soon lead to a useless space behind a king. To follow each line of play can be perplexing at first, but you'll get better at it after playing a few times. It helps to identify a card you would like to move and work back to see what other cards need to move before you can move that card.

Variations: A number of players handle the redeals by omitting the aces and leaving a gap in each row behind the last correctly positioned card. If a row has not yet been started, leave a gap at the left for a deuce.

Deuce: A card of the rank of two; also called a two-spot. 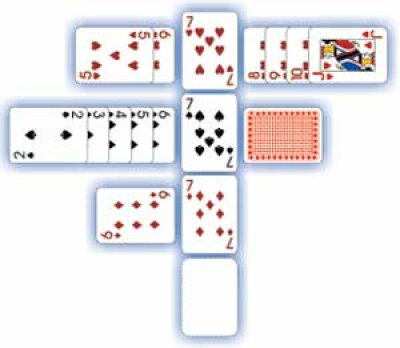 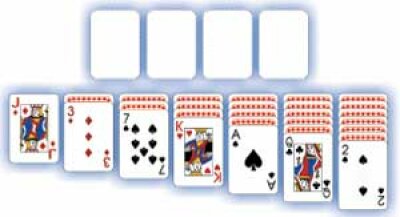 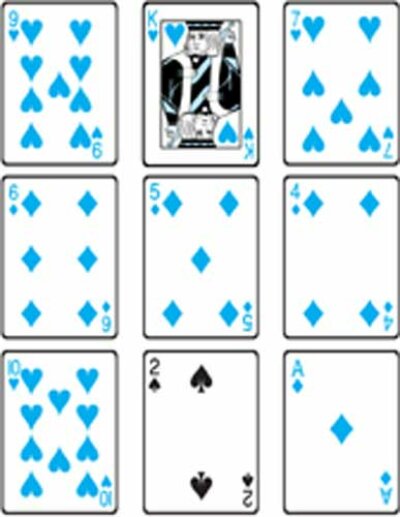