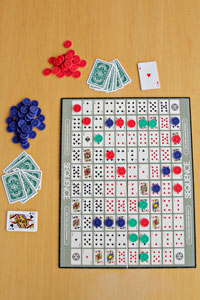 The full Sequence board, with no end to the game in sight.
Photo by Elizabeth Johnston/HowStuffWorks.com

The idea behind Sequence isn't a new one, at least for many game enthusiasts in the southeastern United States. For years, a similar game known as One-Eyed Jack or Jack Foolery has been taking place on kitchen tables and living room floors. The only difference between these games and Sequence is that the board is homemade: A deck of cards is cut in half, and the halves are glued to a board (or simply dealt out on a flat surface) with the Jokers in the corners. Two fresh decks of cards and a set of poker chips are used for play [source: McCloud].

Whichever version you opt to play, the game can be used to illustrate basic mathematical principles. This can be especially useful for younger players, who can hone -- as the game's name suggests -- number sequencing and pattern recognition skills. For example, by considering which move to make next, as well as which move will help create a potential sequence, they'll practice visualizing and mentally manipulating spatial patterns.

One of the most valuable lessons, however, may come in the form of strategy. With every turn, players must decide whether they will add another chip to a potential sequence, block an opponent's potential sequence or start a new attempt at a sequence. And they must make each move without knowing whether they'll draw the card they need most, which adds an element of luck and suspense to the game.

According to Reuter, who invented the branded Sequence game now marketed by Jax Ltd., the most important strategy to follow is to start the game on the offensive by attempting to make a sequence and to continue this strategy through the middle of the game, switching only to defensive mode to block other players' sequences as the game nears its end. He also encourages players to watch for diagonal sequences, which can be harder to see when you're learning how to play the game [source: Reuter].