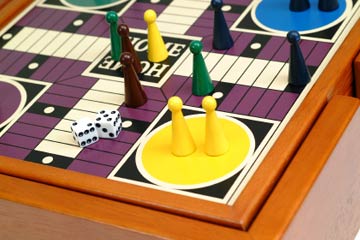 Here, the home rows are in white and the black spaces with white circles are safe. If the yellow player just rolled, he could move a pawn out into the safe space the dice are touching, then move it two spaces and knock the maroon player's pawn home.
©iStockphoto.com/icelandr

Each player in Parcheesi starts with four pawns in her home circle, and the first player to get all four pawns to the center of the board wins the game. To begin, all players roll the dice; the highest roller gets the first turn.

At the beginning of your turn, you roll the dice. Based on the numbers you roll, you'll have a few options.

If you've rolled a five -- either on a single die or as the total shown on both of the dice -- and you have pawns in your home circle, you must move a pawn out of your home circle and onto the board. Pawns enter on the safe space directly to the left of your home circle. (If you roll double fives, you can move two pawns out to occupy the same safe space. We'll get into more detail about double occupancy on the next page.) If you did not roll a five and you have no pawns on the board, your turn is over and play passes to the left.

Once a pawn is on the board, it moves counterclockwise around the board based on the numbers you've rolled. You have two options:

If you roll doubles, you get to roll again. If you roll doubles when all four of your pawns are on the board, you get a bonus -- you use not only the numbers shown on top of the dice, but the numbers on the opposite side as well. This always adds up to a total of 14, and can be spread out among up to all four of your pawns. But three times aren't a charm in Parcheesi: Roll three sets of doubles, and one pawn gets sent back to its home circle.

Once a pawn circles the board once and reaches its home row (the center row to the left of each player's home circle), it cannot enter the central home space until you roll the exact number of spaces remaining. That is, if the pawn is four spaces away but you roll a six, the pawn cannot move [sources: J'Ollie Primitives; Robinson; Hasbro].

Parcheesi's reliance on dice may sound luck-based, but there are actually several mathematical principles at play. Read on to find out how probability and some strategic planning can help you turn luck in your favor.