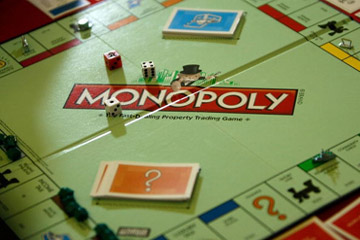 A Monopoly board in play during the U.S. National Monopoly Tournament in Washington, D.C.
Alex Wong/Getty Images

Monopoly is one of the most popular board games in the world. Since Parker Brothers first starting selling Monopoly in 1935, over 200 million sets have sold worldwide and an estimated 1 billion people have played the game [source: Hasbro]. For gamers, Monopoly offers the perfect balance of chance and strategy. For children, it's one of the first times that parents give them "money" to spend as they like. And everyone loves the "Get out of jail free" card, right?

The game is relatively easy to play: Simply rack up as much money and property as possible as you bankrupt other players. That said, the history of Monopoly is more complicated than Parker Brothers -- or Monopoly's current brand owner Hasbro -- would care to admit. The official Monopoly creation story takes place during the Great Depression. An unemployed radiator repairman from Philadelphia named Charles Darrow invented the game, had his prototype rejected by Parker Brothers, and then sold enough copies out of his house to convince Parker Brothers to produce the game, sparking an overnight success [source: Hasbro].

That's the official history; the actual history of Monopoly started back in 1904, when an economic activist named Elizabeth Magie patented the Landlord's Game [source: Williams]. The Landlord's Game challenged players to buy properties and charge rent to demonstrate the inequalities of turn-of-the-century capitalism. Parker Brothers rejected Magie's game, largely because they couldn't figure out how it would end [source: Williams]. Over the next 30 years, Magie and others published their own versions of the game, often naming the properties after streets in their hometown. Over time, Community Chest and Chance cards were added and some games included a financial advantage for owning a group of nearby properties, known in the game as a monopoly.

In the early 1930s, Charles Darrow played a version of Magie's game at the home of some friends in Atlantic City, N.J. The local board included Atlantic City streets and locations like Marvin Gardens (a misspelling of Marven Gardens), St. James Place and the boardwalk. Darrow saw the genius of the game immediately and quickly created his own version called Monopoly -- which he didn't bother to patent before selling copies at Wanamaker's department store in his hometown of Philadelphia. When Parker Brothers executives saw how well the game was selling, even in the middle of a depression, they offered to buy the idea from Darrow. But before they could do that, they had to buy Magie's patent. As part of the deal, they offered to sell a few of Magie's other game ideas, none of which approached the colossal success of Monopoly [source: Williams].