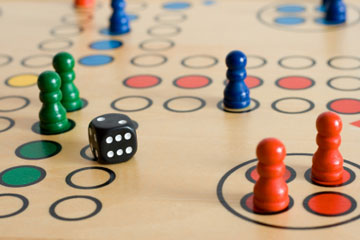 Ludo, a U.K. version of Pachisi, is played on a slightly simplified board.
©iStockphoto.com/mura

The West knows it as Parcheesi, but this game has its ancestry in India under the name Pachisi. One of the main differences between Parcheesi and Pachisi is that Pachisi is played in two teams of two players, each with her own set of pawns, which adds a new level of strategy as each player works to help her partner's pawns as well.

Pachisi is the younger sibling of a game called Chaupar, which was a slightly more complex and highbrow version of the game played by aristocracy like the Mogul Emperor Akbar (not from "Star Wars"). It's likely that Akbar and his contemporaries usually played on a traditional cloth board. However, one of the perks of being an emperor is that you can play games with a life-sized board built into your palace gardens and use your harem girls as pawns, which Akbar did -- you can still see his Chaupar court today in Fatehpur Sikri, India [source: Whitehill].

Chaupar appears throughout Indian history and culture as well. For example, it got a sizable popularity boost when it was featured In the Mahabharata, one of India's classic epics believed to have originated between 540 and 300 B.C. [source: Internet Sacred Text Archive]. In this text, the character Shakuni uses Chaupar to defeat his enemy, Yudhisthira [source: Hindustan Times].

Historians believe that Pachisi originated in India around the 4th century A.D. [source: Whitehill]. It headed west in the 1860s, first traveling to England (which had taken over rule of India from the British East India Company in 1858) and then further into Europe. In the late 1890s, the English developed a simpler form called Ludo, which was primarily designed for and played by children. Unfortunately for Pachisi, this created an association primarily with the juvenile population and detracted from its success with English adults.

Pachisi first appeared in America between 1867 and 1870, where it took on the name of Parcheesi that we know today. The rights to the game went through a few changes of ownership, but they currently reside with Hasbro. As a result, while there are many games today that are similar to Parcheesi, only those sold by Hasbro can use that name. Games produced by any other company often give their products vaguer monikers, such as Milton Bradley's "The Game of India."

Parcheesi has continued to evolve during its worldwide spread. Here are a few of its relatives [source: Whitehill]:

Whether the versions your family plays incorporate Pop-O-Matic bubbles or background stories, Pachisi and its derivatives boast rules simple enough for a child to pick up and strategies complex enough to hold her attention as she grows up, earning this family of games its status as classics.