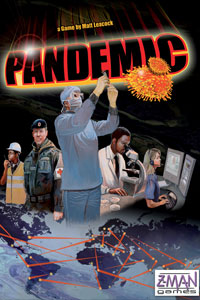 The Centers for Disease Control and Prevention battles disease in the board game Pandemic.
Image courtesy Z-Man Games

The first reports of infection emerge from Moscow and Osaka. Before long, cases pop up in Mexico City, New York and Johannesburg as well. As doctors and researchers struggle to contain the illness, it happens: A full-blown outbreak, or epidemic, occurs, with the number of cases rising beyond what's normally expected. Ensuing infections rapidly spread through North and South America, and the U.S. Centers for Disease Control and Prevention scramble to contain the global pandemic, an epidemic that cuts a wide geographic path.

This scary, real-world scenario lies at the heart of Pandemic, a cooperative board game in which two to four players attempt to mitigate the global outbreaks of four infectious diseases. Each player takes on different character role -- operations expert, scientist, medic, researcher or dispatcher -- each with its own particular in-game strengths. As disease counters pile up on the world-map game board, the players move their pawns from city to city in an attempt to treat, cure and eradicate each disease before it becomes too late.

Pandemic players don't just work toward the same goal, however. In order to stem the tide of accumulating infections, they have to share information, trade game cards and coordinate their efforts.

This is where the game mechanics of Pandemic get interesting. There's no single path to victory in the game. Will the players all focus on eradicating one disease before tackling the other three? Should the scientist character help the medic clean up minor infections in Asia, or should they head off the lone, looming outbreak in distant Santiago, Chile?

There are no designated team leaders in Pandemic, so the course of the game depends in part on the personality and relationship dynamics among the people gathered to play. Can two dominant types collaborate for the common good of humanity? Will spouses squabble over the best use of a powerful card? The promise of "cooperative game play" may sound stress-free, but don't be surprised to break into a nervous sweat as the infection counter creeps up.

Published in 2008 by New York-based Z-Man Games, Pandemic is the brainchild of Silicon Valley game and user experience designer Matt Leacock. A fan of such popular cooperative games as Reiner Knizia's "Lord of the Rings," Leacock was inspired by game systems that function like a thinking opponent [source: Thompson]. In other words, the force that players struggle against is akin to programmed artificial intelligence in a video game. Both are modeled to behave in a particular way with a certain degree of randomness. Real-world researchers use computer models to study the spread of disease, so a global pandemic threat seemed to Leacock a perfect fit.

How does all of this come together? Learn how to play Pandemic on the next page. 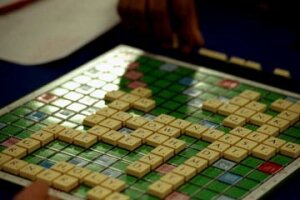