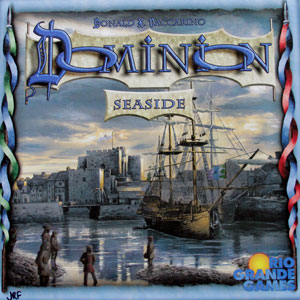 Although most can't be played without the original set, fans will find Dominion's expansions -- like Seaside -- well worth the investment for the extra options they provide.
Photo by Elizabeth Johnston, HowStuffWorks 2012

Vaccarino e-mailed Jay Tummelson, the founder and owner of Rio Grande Games -- a company based in Placitas, N.M., that since 1998 had made a name for itself by publishing American versions of European strategy games, such as Settlers of Catan, as well as a number of American-designed card and board games. Tummelson replied almost immediately and the two made plans to meet at an upcoming game convention, the Origins Game Fair, during which Tummelson would test Dominion. For Vaccarino, the result of this meeting would be -- if you'll pardon the pun -- a game-changer. Tummelson agreed to publish Dominion and, in effect, helped launch Vaccarino's career as a game designer.

In 2008, the year of Dominion's release, it won a Meeples Choice Award. In 2009, it won two German awards for game of the year, the Spiel des Jahres and the Deutscher Spiele Preis. That same year, Dominion was named a Golden Geek Card Game Winner and Mensa Select Winner, and it received the Diana Jones Award for Excellence in Gaming and the Origins Award for Best Card Game of the Year. It also was named best card game of the year in Russia and went on to become a worldwide phenomenon, selling more than 300,000 copies and being translated into in 19 languages in its first two years on the market [source: Law].

Although Vaccarino expected Dominion to be a hit with gamers, its widespread popularity came as a surprise. Dominion attracted not only high-level tournament play, but also novice gamers and families looking for a new twist on game night [source: Thompson].

After Dominion's commercial achievements, Vaccarino went on to experience additional interest from publishers. Several of the games he invented before Dominion, including Kingdom Builder (Queen Games) and Monster Factory (Rio Grande Games) were then sold and released. In 2012, he also debuted the game he invented after Dominion, Nefarious (Ascora Games). Still, Vaccarino often jokes that he isn't a game designer, he's a Dominion expansion designer [sources: Law; Mastrapa]. Since Dominion hit retailers in 2008, Vaccarino has painstakingly created six Dominion expansion sets (as of early 2012) that offer additional cards and game mechanics to players: Prosperity, Cornucopia, Hinterlands, Seaside, Alchemy and Intrigue. Intrigue is the only one of the lot that contains everything you need to play out of the box -- the rest must be paired with either the base set or Intrigue.