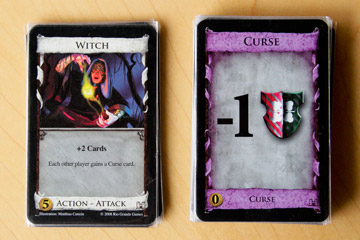 When Action-Attack cards like the Witch come into play, strategy gets a bit more complicated.
Photo by Elizabeth Johnston, HowStuffWorks 2012

Most Action cards only apply to the person who plays them, but some -- the Action-Attack cards -- allow you to disadvantage your opponents by making them reveal, discard or even trash cards from their hands or decks. And one Action card in the original game, the Witch, forces opponents to add a Curse card to their deck. Curses counter victory points at the end of the game (each equals one negative victory point), and, just like Victory cards, they're dead weight whenever you draw them into your hand. The expansions add several other delightfully nasty cards like this.

These strategically (and sometimes emotionally) offensive cards can change a friendly, everyone-for-himself game into something more aggressive and competitive. When one or more of them are included in a given game's Supply, you'll have to pick your strategy: Do you go in strong, buying and unleashing attacks early in the hopes of unfooting your opponents? Or do you think the best offense is a good defense, and therefore choose to spend your resources building up your usual moneymaking machine?

Either way, maintaining a balance of these cards in your deck is key to winning -- and, like for Victory cards, the key to balancing them in your deck is watching what your fellow players buy. If you turn the game into an arms race, you'll never buy enough Victory cards to win; however, once opponents begin buying up Action-Attacks, buying a couple yourself will prevent them from steamrolling you. Also watch for Action cards that can be used defensively -- having a Moat in your hand will let you block attacks, and several Actions let you trash those pesky Curses at will.

Knowing when to buy Treasure cards is trickier to explain because it's highly dependent on the 10 types of Kingdom cards with which you're playing. Some cards give you lots of extra treasure and ways to upcycle your Coppers into Silvers and your Silvers into Golds. Others don't deal with treasure at all. Others will let your opponents attack your coffers, forcing you to discard or even trash your Treasure cards. So when it comes to treasure, go with your gut: If you feel like you don't have enough treasure to buy the cards you want, buy more Treasure cards.

Don't despair if you don't master a winning strategy the first time or two you play the game -- or the first time or two that you play with any new combination of cards. Just breathe deep, take time to read cards and consider how they might be used in combination with each other, and pay attention to the flow of the game. Before long, you'll be king -- or queen -- of a booming dominion all your own.