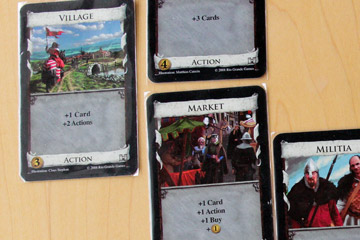 An example of an Action chain that can lead to great success. First I played a Village, giving me an extra draw and two extra actions. The first extra action (a Smithy, partially shown at top) gave me three extra draws, and the second (a Market) yet another draw and action (plus a few extra things; the Market is a powerful card).
Photo by Elizabeth Johnston, HowStuffWorks 2012

To determine your Dominion strategy, you have to keep the end game in mind. When, at the end of any player's turn, the supply of Province cards is completely depleted -- or if any other three Supply stacks on the table have been exhausted -- the game is over. The player with the most victory points (tallied by adding up the total value -- not cost -- of all the Victory cards each player's deck) will win. Although rare, if there is a tie, the tying player who has taken the fewest turns wins the game. Rarer still, if the tying players have the same number of turns, both win.

As you go through the ABCs of each turn, a good strategy is to balance your deck. You need Victory cards to win, but you need treasure to buy them -- and, in turn, you need Action cards to get treasure. A good ratio is to try for is at least 1:4 Action cards to everything else. That way, you're likely to have at least one Action card in each of the five-card hands you draw.

Although each Action card is valuable in its own way, the most useful ones let you both draw extra cards from your deck and take extra actions during your turn. With such Action cards, you'll be able to get more cards into your hand -- and use them -- during your turns. It's not a bad strategy to make these cards the backbone of your own personal Action card supply, and to then flesh your deck out with any other Actions that sound useful.

Although you'll need Victory cards to win the game, if you buy too many too early, you'll clog up your deck with them. Victory cards only become valuable when you tally points at the end of the game. The idea is to begin buying them mid-game, once you've amassed enough treasure through buying and playing Action cards to build up your coffer. If via luck and strategy you get enough treasure in your hand to buy Provinces, do so -- but keep in mind that the game can be won with less-valuable Victory cards as well. However, if you notice that your opponent is snapping up Victory cards early on, then you'd better keep track of what they're buying and work to catch up however you can.

Read on for more about offensive and defensive strategies, and about how to balance the treasure in your deck.