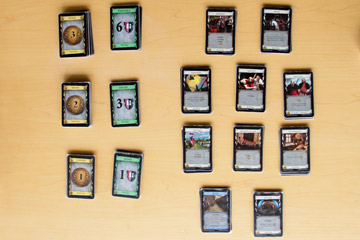 The Supply layout for the recommended beginner set of Dominion cards. (No Curse cards are included because they wouldn't come into play in this game.)
Photo by Elizabeth Johnston, HowStuffWorks 2012

When you open the Dominion box for the first time and take a glance at its components, you may feel like you're about to embark on a complicated endeavor along the lines of Talisman or Sid Meier's Civilization: The Board Game (both all-day affairs, the latter of which is, as one HowStuffWorks staff member put it, probably more time-consuming than building an actual civilization). Thankfully, when it comes to Dominion, there's less than meets the eye.

The original Dominion set has 500 cards, including:

The cards contain information (with the exception of the Trash and blank cards):

To set up the game, give each player 10 cards -- seven Coppers and three Estates. Each player will then shuffle his cards and place them face down. This stack is the player's draw deck. Each player will have his own draw deck, from which he will draw a five-card hand to start the game.

Next, place the remaining Treasure cards and the Trash card face up on the table, each in their own stacks -- this is the beginning of the Supply for the game at hand. (The Trash card will be the new home of any cards that an Action card instructs you to trash.) In addition, add separate stacks of Victory and Curse cards to the Supply according to the number of players:

Not every game will use the Curse cards, but it's good to get in the habit of setting them out.

The players also need to select 10 sets of Kingdom cards out of the 25 different types available. Each set will include 10 cards, unless you select a Kingdom Victory card, such as then Gardens -- each set of those should include the same number of cards as the Victory card piles. Place these stacks face up on the table along with the rest that comprise the Supply. For the first game, the rulebook recommends the:

Return any remaining cards to the box. As you become more familiar with the game, you can select different Kingdom cards to use instead, potentially making the flow of the game entirely different. Or, to introduce an element of surprise, draw 10 Randomizer cards (which represent the 24 types of Kingdom cards) and use the 10 corresponding card sets [source: Rio Grande Games].