The Advent of Dominion 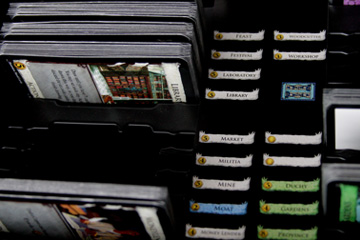 Another pleasant perk eventually added to set Dominion apart from some other card-based tabletop games: The box contains a ready-made filing system to keep all those cards tidy and accessible.
Photo by Elizabeth Johnston, HowStuffWorks 2012

Donald X. Vaccarino spent the fall of 2006 mulling over a new game, one that avoided a few of the irritations he had encountered during tabletop card games. He didn't want cards to be discarded or become otherwise stagnant and inaccessible after they were played once -- or, even worse, before they could be played at all.

In designing Dominion, Vaccarino hoped to solve this issue. After playing any card that doesn't explicitly state otherwise, it's placed into your own personal discard pile, to be eventually recycled back into your deck. This means that you'll have the chance to play them again and again.

While many games leave the receipt of cards up to chance, Vaccarino made Dominion's cards available to all players: Any player can buy any card -- as long as at least one copy of the card is still available and the player has sufficient resources to do so. An element of chance is retained, though: Players add the cards they buy into their deck and draw a five-card hand at random each turn.

During a last-minute push to entertain friends at one of his regularly scheduled game nights in October 2006, Vaccarino took the game from concept to reality. Soon, Vaccarino began to suspect he had a hit on his hands; his friends preferred Dominion over the games they normally played [source: Law]. Its design was similar to German-style tabletop games, sometimes known as Euro-games, which feature short playing times, simple rules and an emphasis on strategy over luck.

Dominion wasn't the first game Vaccarino, a San Francisco-based computer programmer, had invented [source: Varney]. For years he'd been designing games as a hobby, creating everything from children's to German-style games, and offering them to publishers like Wizards of the Coast (now a subsidiary of Hasbro), the company that published Magic: The Gathering and Dungeons & Dragons. As the rejections piled up, however, he decided to try a different approach for Dominion. He took a closer look at the games he owned and noticed many of them carried the Rio Grande Games logo. What he did next made all the difference.