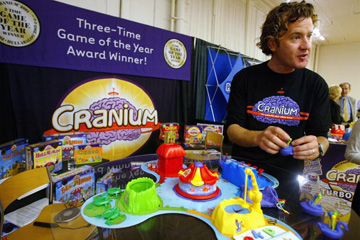 In the deep, dark underbelly of Seattle lives the genus "Microsoft Millionaire." You might recognize them by their joie de vivre and, well, money. They are the lucky few who started with Microsoft when it was just a promising software company, only to find themselves -- within a few years or a decade -- blessed with stock options boasting bottom lines that looked like Swiss bank accounts. Free to retire at absurdly young ages, these men and women were left to roam the Northwest thinking of awesome ways to spend --and make -- money.

Richard Tait and Whit Alexander belonged to this West Coast tribe in 1997. Both former Microsoft employees who shared an interest in beginning a start-up that veered from the glutted tech market, Tait convinced Alexander that a board game where everyone's skills were celebrated was missing from the market. Using $100,000 of their own money (or Bill Gates', depending on how you look at it), the pair came up with a prototype and began the process of shopping it around [source: Bick].

Although initial tests were positive (so positive, in fact, that a tester tried to sneak off with the prototype), it was still probably a bad idea that Tait and Alexander asked their Chinese manufacturer to produce 27,000 games ... and then missed Toy Fair, the annual purchasing convention for toy retailers [source: Cook]. No doubt feeling a little less like Star Performers, the two were sitting at a Starbucks when they realized that people could buy the game outside of a toy store. Luckily, they had a connection with Howard Schultz (who used the more traditional CEO title in his role at Starbucks) and struck a deal to sell the games in the coffee shops [source: Bick]. More importantly, they gave copies to the shops for customers and employees to play when hanging out. Turns out that people are much more likely to buy a game when it's been recommended or already played.

So before Cranium had ever seen the inside of a toy store, Starbucks was selling its first ever board game like hotcakes (or nonfat vanilla lattes). As we already mentioned, Alexander and Tait continued their unorthodox selling strategy, meeting with Barnes & Noble representatives despite protestations from the company that "we don't sell games" [source: Bick]. What changed their mind? The company's director of gift merchandising played the game with staff, and they agreed it was worth stocking.

The Cranium honchos also launched a marketing campaign in which radio DJ's read trivia questions from the game and gave away free copies, once again making the bet that once you played it, you'd recommend it.