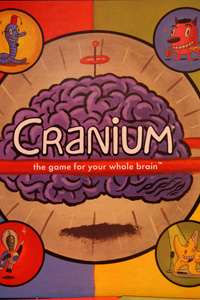 Even shy folks might warm to this brainy game.
Spencer Platt/News/Getty Images

When I'm in a social situation and one of those fun "party games" is pulled out -- you know the ones, where you team up to act out movie titles or make up meanings of nonsense words -- my first inclination is fear. I'm the kind of person who fears forgetting her name under pressure, for instance, and I'm as artistically inclined as your average preschooler.

But a funny thing happens when the game pulled from the shelf is Cranium. Instead of putting on a brave face while breaking out in a flop sweat, I find myself narrowing my eyes and sizing up my competition. Because while in a lot of ways Cranium is your standard party game, complete with elements of Pictionary, Charades, Trivial Pursuit and even Scrabble, that's also what sets it apart from the competition. In theory, everyone who plays Cranium can find a category to excel in, helping your team and boosting your own ego.

So if sculpting a teapot out of clay will have your team guessing you've created some sort of stork, no worries -- maybe you'll do better with the Word Worm card, where you might have to spell a word backwards correctly on the first try. Or perhaps you're more the Data Head type, where you'll be asked trivia and knowledge questions. And if you're a born ham, you'll find yourself jonesing for Star Performer cards, which might have you humming a tune or speaking in the plummy accent of a famous British actor.

You might have noticed that none of these tasks is necessarily for the shy or meek. Because while Cranium does give everyone a chance to shine (as the game often points out in marketing and promotional literature), the truth is that it's definitely designed for those who want to shine. That is, those who don't mind performing in front of a group, showcasing their skills in a pretty outgoing way.

But what do you expect from a company started by two guys who chose to christen themselves the Grand Poo Bah and the Chief Noodler, throwing out the stale and demure CEO and president titles? And you're right to expect some serious outside-the-game-box thinking from the company that created the game. For instance, Cranium was the first game to be sold both in Barnes and Noble stores as well as on Amazon.com.

More surprisingly is where it sold first. Use your brain power to maneuver over to the next page to find out how Cranium made selling your game at a toy store an option -- and not a necessity.