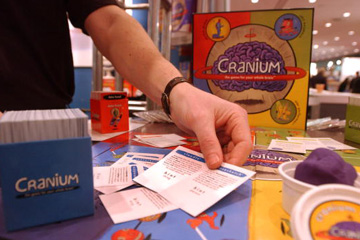 Cranium is a team game, so you'll need at least four people to play. Each team puts their game piece at start, which is a Planet Cranium (marked by the purple brain). This means that the team gets to pick their category, and it happens four times in a game. Using the timer to determine when guesses must end, the first team chooses from one of four categories to draw a card from:

If the team is successful on the first card, they get to roll the 10-sided die and proceed to the correct color on the "fast track. (A purple roll lets you skip ahead to the next Planet Cranium and the card of your choice.) If they weren't successful the first time, they stay on Planet Cranium until a fruitful turn, then roll the die to proceed on the "scenic path" (a longer trail to the final destination). At each Planet Cranium space, success or failure will decide whether you're fast-tracking it or meandering along scenically until the next Planet.

Along with regular cards, you might also pull out a Club Cranium card on your turn. These require that everyone does the activity, and the first team to get the answer scores a bonus roll (you get another card right after for your team).

Once a team arrives at Cranium Central, members roll the due to determine which deck of cards to start on. On each turn, complete one activity from each four decks. (If unsuccessful on the activity, stay on the deck to try again next time.) After each four activities are complete, the other team will pick a final card for you from any deck. If your team is the first to complete all four activities in Cranium Central plus the other team's choice, congratulations, smarties -- you've won Cranium.

Now let's roll our colored die to the next page, where we'll learn some more about the psychology of Cranium and how some of us can actually -- gasp -- learn from the game!