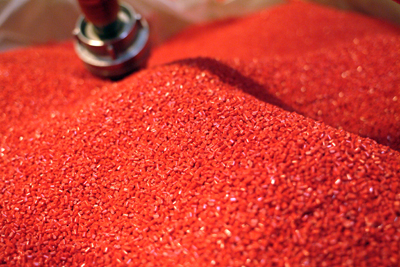 All of the basic Lego elements start out as plastic granules composed primarily of acrylonitrile butadiene styrene (ABS). A highly automated injection molding process turns these granules into recognizable bricks. The making of a Lego brick requires very high temperatures and enormous pieces of equipment, so machines, rather than people, handle most of their creation.

When the ABS granules arrive at Lego manufacturing facilities, they're vacuumed into several storage silos. The average Lego plant has about 14 silos, and each can hold 33 tons of ABS granules. When production begins, the granules travel through tubes to the injection molding machines. The machines use very accurate molds -- their precision tolerance is as little as 0.002 millimeters.

The machines melt the granules at temperatures of up to 450 degrees F (232 degrees C), inject the melted ABS into molds and apply between 25 and 150 tons of pressure. After about seven seconds, the new Lego pieces cool and fall onto a conveyor. At the end of the conveyor, they fall into a bin.

When the bin fills, the molding machine signals a robot to pick it up and carry it to an assembly hall. In the Billund factory, eight robots move 600 bins of elements per hour. In the assembly hall, machines stamp designs onto bricks and assemble components that require multiple pieces, like minifigures, also called minifigs. The machines assemble the components by applying precise amounts of pressure to specific parts.

From there, the elements go into packages, as we'll see in the next section.