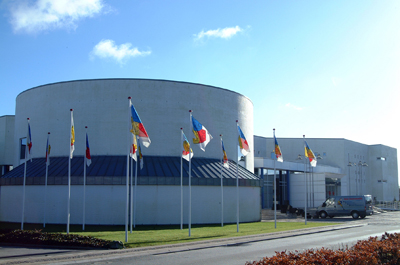 The Lego Group is now the fourth largest toy manufacturer in the world. It's a privately owned business that employs more than 5,000 people worldwide. About 150 designers of 18 nationalities design and plan the elements for all the different Lego sets. These sets are sold in more than 130 countries.

But the company started as a small family operation. It began in 1932, when Ole Kirk Christiansen started a business in Billund, Denmark. Christiansen made things from wood, including ladders and toys. Christiansen's company continued to make wooden toys until 1960, when its wooden toy warehouse was destroyed in a fire. In 1934, he named the company "Lego," an abbreviation of the Danish words "leg godt," or "play well."

Lego started making plastic toys in 1947, and it was the first company in Denmark to use a plastic injection-molding machine. By 1951, plastic toys made up half of the company's output. The company refined their designs between 1949 and 1958, but since 1958, the basic bricks have remained unchanged.

The Lego Group began adding additional elements to the basic bricks in the 1960s and 1970s. Lego figures, which originally had a yellow skin tone and were neither male nor female, arrived on the scene in 1974. The mechanical elements known as Lego TECHNIC hit the market in 1977, and MINDSTORMS robots products made their debut in 1998. The MINDSTORMS line was the product of a collaboration between the Lego Group and the Massachusetts Institute of Technology Media Lab.

A Brief History of Tubes

In 1949, Ole Kirk Christiansen introduced Automatic Binding Bricks, a precursor to modern Lego bricks. These plastic bricks didn't have interior tubes, so creations built with them weren't very stable. The company added tubes to the basic brick in 1958 and patented the design. Basic Lego bricks have remained unchanged since then -- brand new bricks are compatible with the ones produced in 1958.