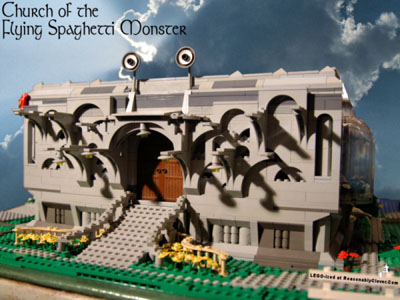 "The Church of the Flying Spaghetti Monster was one of my first ventures into Lego Town-style building," Doyle says. "I went through the same basic starting steps that most builders do -- I doodled a few ideas for the façade and mapped out some rough floor plans. Then I set up a spare card table in my workshop, covered it in base-plates, roughed in the outer wall, and just started adding bricks. Most of my Lego creations take shape in this fairly unstructured manner -- I have a rough idea of what I'm aiming for, but the end result usually surprises me. Construction on the Church took roughly four months in total -- but it was very much a start-and-stop process. I'd finish an area and then have to wait for inspiration to strike before moving on to the next. Actual building time was probably close to 30 hours. Since I built things as I went along I don't have an exact count of the number of elements used, although a fair estimate would be around 3,000 bricks total."

Next, we'll look at the history of the Lego brick.