Browse the article How to Play Horseshoes 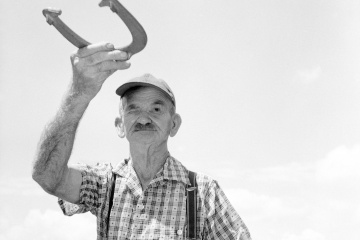 The game of horseshoes has been enjoyed for for hundreds of years, and continues to be popular with young and old players alike.
©H. Armstrong Roberts/CORBIS

Horseshoes may serve a certain function for a horse, but people tend to think of horseshoes as an item of superstition rather than sound footing. We hang them over doors for luck and fortune. We also like to throw them around, turning a piece of metal into a game of high stakes in backyards around the world.

The game of horseshoes is believed to date all the way back to the ancient Greeks, likely starting as a modified version of a game called quoits, which itself started as a modified version of Grecian discus throwing. Chariot-riding Romans are thought to also have been historical horseshoe players. Although the ancient Greeks may have been the ones to first play the game, it's now a lawn game enjoyed around the world, played in countries including Italy, Israel and South Africa. And it's thought that Americans have been playing since the days of the Revolutionary War, having caught on among soldiers before it invaded urban neighborhoods and suburban cul-de-sacs.

It's estimated that more than 15 million North Americans play horseshoes, casually at home as well as in organized leagues and tournaments across America and Canada [source: NHPA]. There are many expert ringers out there, probably more self-proclaimed than world-renown, but whether players play by the rules and regulations set by National Horseshoe Pitchers Association (NHPA) or the rules of their own backyard, you don't really need much to get a game going. It's really nothing more than shoes, stakes and a spot of level ground.

Let's review the basic rules and regulations of the game, just in case you find yourself in the pitcher's box. 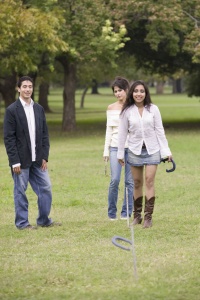 While there are regulation court sizes for horseshoes, all you need for a casual game is enough space for a throw.
©Patrick Lane/Somos Images/Corbis

Although you could play horseshoes solo, the game is supposed to be played with two to four players, or in casual games with as many players as you choose; either player-versus-player or pair-versus-pair. Each player throws -- called "pitching" in the game -- a horseshoe, trying to catch the shoe on a stake in the ground, or at the least land the shoe within 6 inches (15.2 centimeters) of the stake. Although you could play with a real horseshoe, competitive horseshoe games are played with pitching shoes. These shoes look and feel like horseshoes but are stylized, and designed for peak game performance.

Games are made up of innings, and each player (or pair of players) pitches two horseshoes at a stake in the ground during each inning. There is no set number of innings; rather, the first player or pair to score 40 points wins the game.

Horseshoes is played on a court. The playable area of a regulation horseshoe court, called the pitcher's box, is 46 feet (14 meters) long by 6 feet (1.8 meters) wide, plus two pitching platforms, each 6 feet (1.8 meters) square, and protective backboards. Two iron rods, each 36 inches (91.4 centimeters) long and 1 inch (2.5 centimeters) wide, are staked in the center of the pit, and centered between the two pitching platforms as well. Those stakes are what you hope to catch your horseshoes on. They're driven into the ground at about a 12-degree angle, with about half of each rod above ground and the two rods leaning toward each other. Foul lines are drawn at 27 feet (8.2 meters) and at 37 feet (11.3 meters) from each stake -- these lines determine the distance from which players pitch their horseshoes. General rules are that adult men pitch shoes from 37 feet (11.3 meters), and women, kids and senior citizens pitch from the 27-foot (8.2-meter) line; kids younger than 9 can pitch from a 20-foot (6.1-meter) distance. The top 2 to 4 inches (5 to 10 centimeters) of soil or sand in your pit should be loose and level [source: NHPA].

Backyard games are similar; they are usually played in dirt, sand or asphalt pits with enough space to get a good toss in, and with at least two players. But all you really need to get a game started is yourself, a horseshoe and a metal rod staked in level ground.

The Art of Pitching Shoes

A single player may pitch as many as 3,000 horseshoes during the gameplay of a tournament [source: NHPA]. But before you can pitch 3,000, you need to pitch one. The first one. Let's talk how.

There are two ways to pitch a horseshoe that are basic enough for all levels of players, including those who've never pitched before: the flip and the one and one-quarter turn.

While single-flip pitching is easier for beginners to master, more serious players find they get better results with a turn. We'll walk through the basics of both, starting with the flip shoe (also called a tumble shoe).

Before you can properly pitch a shoe, you need to properly hold the shoe. The open end of a horseshoe, the side with the two tips, is known as the heel or heel caulks; the toe of a horseshoe is the part opposite the heel. The arms of the shoe are called shanks. How you grip your shoe can make or break how successful you are at landing your pitch.

To execute a flip pitch, hold the horseshoe by the toe, at arm's length, gripped between your thumb and index (or index and middle) finger. The heel caulks should point toward the caulks at the stake you're aiming at. Start by swinging your pitching arm like a pendulum, and release the shoe as your arm comes forward, at eye level. No two pitchers will throw with the same technique, but be sure to put enough power behind your swing to send that shoe about 6 to 8 feet (1.8 to 2.4 meters).

More advanced pitchers may want to try turns, and one of the most common is the one and one-quarter turn. To execute a one and one-quarter turn, first hold your horseshoe by one shank, with the opening of the horseshoe to the left of your grip (this is for right-handed pitchers; it will be opposite for lefties). Swing your pitching arm back and forth, again like a pendulum, and as you're pitching forward extend your arm, keep the shoe level with the ground and let it go after your arm swings by your leg (although some pitchers may prefer to let go of the shoe closer to chest level).

Each player has 30 seconds to pitch both shoes. Whoever wins the previous inning pitches first in the next. Now that you have basic rules and technique, let's talk scoring.

Playing horseshoes is not just friendly competition -- it's also great exercise. Horseshoes weigh about 2.5 pounds (1.1 kilograms), and you'll throw two shoes for roughly 50 innings if you play to 40 points. Throwing that weight -- combined with the walking, bending and lifting you'll also do in the course of play -- it's estimated that the average Joe could burn as many as 150 calories every hour playing the game [source: Lanhum, Krautwurst].

Scoring a Game of Horseshoes

At the end of each inning the number of shoes is tallied.

The first task in scoring is counting up the live and dead shoes. Live shoes are shoes that landed within playable boundaries. Dead shoes are those that landed outside the pit area or somehow otherwise break a rule of the game, as well as -- and this will make sense in a minute -- shoes that are dead ringers.

There are two ways to score a game of horseshoes: counting points (called the count-all method) and the cancellation scoring method. Let's talk about how to score with count-all rules first.

In count-all scoring, each player has the chance to score a maximum of six points per inning. Live shoes will either be ringers, leaners or close to the stake. Ringers are horseshoes that land around the stake; ringers net you three points, the most points awarded in the game. Leaners are horseshoes that have landed vertically and are leaning against the stake rather than encircling it. Leaners are worth one point. Any horseshoe that lands within 6 inches (15.2 centimeters) of the stake is considered close to the stake and also counts as one point. If both your live shoes land closer to the stake than those of your opponent, you earn two additional points that inning (including if one of those shoes is a ringer). Some play a variation of this scoring method, where only ringers are awarded points. No points are awarded for dead shoes.

These aren't the only rules of the game, though -- there are also cancellation rules. Under cancellation rules you score points the same as in count-all but with a twist. In addition to earning points each inning for the live shoes you throw, you also have the chance to cancel out the points your opponent scores. How? Pitch the same game. For example, say your opponent throws a ringer, which should count as three points. If you, too, throw a ringer in your following turn during the same inning no points are awarded -- you cancel out each other's' points; this is called a dead ringer. The same cancellation throw rules apply to leaners and shoes close to the stake, as well. No points are awarded for dead ringers or any other tied shots.

Close Only Counts in Horseshoes

Have you ever heard the expression "close only counts in horseshoes" when someone is talking about missing a success by a narrow margin? That idiom is born from the fact that pitched shoes that land close to the stake can still earn points.

Author's Note: How to Play Horseshoes

Prior to researching and writing this article, I'd never pitched a horseshoe in my life. But now, who's up for a game?