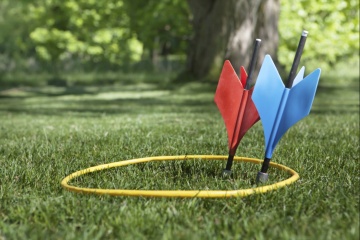 They look innocuous enough parked in the ground, but catch one of those vintage and outlawed (in the U.S.) lawn darts in the noggin, and you might be singing a different tune. Actually, you might not be singing at all.
Sherwin McGehee/E+/Getty Images

Ah, the bucolic days of summer vacations. The spitting sprinkler cooling you off in the yard while you read under the shade of a tree, that ear-piercing scream you hear when someone is pierced with the business end of a flying projectile during a friendly game of lawn darts.

If you're not familiar (or were born after 1988, when they were first banned in the United States) lawn darts are pretty much as they sound: dart sets that are designed to be thrown at a target, in this case, a large ring or hoop, lying in the grass. The closer you get to the target, the higher your score. Of course, getting in the hoop is even better. It's the same idea as a few other games we'll discuss, like horseshoes and bocce. Or darts, for that matter.

If flinging metal-tipped missiles around the yard sounds dangerous to you, then you're pretty much spot-on there. Keep in mind that these aren't regular-old dangerous darts; lawn darts were almost a foot long, with a weighted tip [source: CPSC]. We're being a bit flip here, but the Consumer Product Safety Commission's 1988 ban on them wasn't a joke: Three kids died as a result of a lawn dart injury. Between 1978 and 1986, emergency rooms reported 6,100 visits due to lawn darts [source: Baker]. (That's about the same amount of people who are going to the emergency room every year in the U.S. for heat-related illnesses, like dehydration or heat stroke [source: CDC].) In other words, they have a fairly significant record of being unsafe.

But before you glumly pack up your steel projectiles to quietly watch grass grow, know this: You are not the only one who still wants to play lawn darts. And there are a lot of toy and outdoor game companies trying to woo you their way with activities that might not be great for the lawn, but aren't going to leave blood on it either. 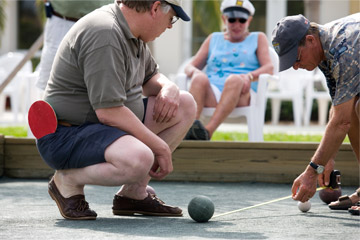 So play away, and stay safe. And if you need lots more ideas for fun lawn games, check out more links on the next page.