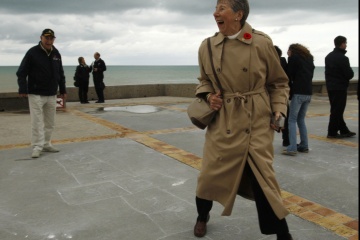 While it's most often enjoyed as a childhood game today, its roots may be traced to ancient authority. Hopscotch may have been an agility training exercise soldiers used during the early days of the Roman Empire, although back then they played on courts up to 100 feet (30.5 meters) long [source: StepUp4Change]. There's also some evidence, though, that the game may have origins in China. Regardless of where it began, hopscotch is now a game with global participation.

The object of hopscotch is to hop from point A to point B and back again without hopping on any lines -- the origin of the name comes from hopping "scotch" or hopping lines -- and without losing your balance. But the real object of the game is to be the first to complete every hop. To play a game of hopscotch you'll need markers and you'll need a court. A coin, a small stone or another small solid object (even your keys) make good markers, and many games have been played on a simple chalk-drawn court. Hopscotch is truly a casual game; unlike other backyard games such as horseshoes or bocce there is no hopscotch association or world federation or any sort of ruling party. There are, though, a few basic rules to know.

Hopscotch, under the most common rules, can be played solo or with a group of any number of people you like. When playing in a group, determine a player order before you begin playing and stick with it throughout the game to be fair.

Basic game play involves tossing an object and hopping. The first player up throws their marker into the first square. That player then hops over the square with the marker, landing on one foot in the next available empty square. That player continues hopping -- and balancing -- on just one foot per square, following the order of the squares on the court. Hop on the same foot throughout each turn, and just one hop per square, please, with two exceptions: Some court designs include side-by-side squares, where a player jumps with one foot in each square during that hop (as long as there is no marker in the square), and some include rest squares, where a player may put both feet on the ground.

Reaching the end of the court, the player turns around -- still balancing on one foot -- and hops in return through each square of the court. On the way back, the player must pick up the marker and hop over that square without losing balance.

Your turn is over if you lose your balance, hop on a line, or touch a line with a hand. Your turn is also over if your marker toss misses the designated square or lands on a line.

As of 2013, Ashrita Furman holds the record both for most hopscotch games played in 1 hour (a whopping 33 games) and fastest game played (a very brief 1 minute, 1.97 seconds) [source: Guinness World Records]. 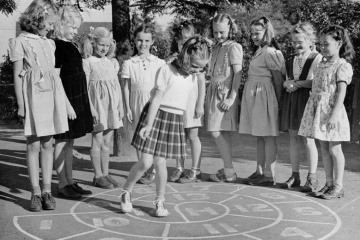