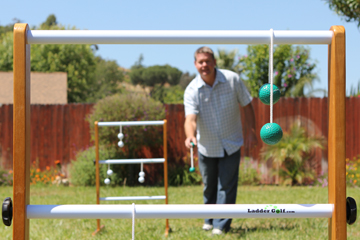 Ladder golf is the brand name for a packaged version of ladder ball. See pictures of classic toys and games.
Ladder Golf

At a recent barbecue, I discovered a new lawn game. New to me, I should say; everyone else in the world has apparently been tossing tethered golf balls at ladders for years.

Two ladders stood on the grass. My friend held three sets of small, red balls connected by a vinyl cord, and she handed me three blue ones. She called them "bolas," and they felt nice and heavy. I tossed one underhand at a ladder, wrapped it around the second rung, and spilled my beer celebrating. I liked it even better than Baggo.

A couple days later I picked up a plastic ladder-ball set for $35. They range from about $25 to $150, mostly depending on ladder material. Plastic tends to be cheapest, followed by metal, followed by wood. Some sets come with carrying cases for playing ladder ball on the go.

You may not know this game as "ladder ball." You may call it "Ladder Golf," a brand name for the first packaged version of the game. As the story goes, a guy named Matt Peterson saw people playing the game on campgrounds in the '90s, and he saw a business opportunity. In 2003 he started his company Ladder Golf, Inc. with two friends [source: Piazza, BackyardGameZ].

You might also know it as "ladder toss," "rodeo golf," "hillbilly horseshoes," "flingy pongy," "snakes and ladders," "bola toss," or "blongo ball." No idea on that last one.

Whatever you call it, the ladder-and-bolas thing falls into the "leisure game" or "lawn game" category alongside the likes of bocce and Baggo (a.k.a. bean bag toss or cornhole). It's simple, one-handed (no need to put down that beer), conducive to socializing and doesn't need a flat surface, which makes it ideal for backyards and campgrounds. It's really easy to play: Stand five paces from the ladder, aim, toss, and wrap as many bolas around the ladder rungs as you can.

Or maybe not as many as you can. It kind of depends. So maybe it's a little more complicated than that.