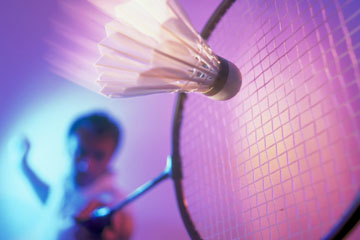 Plenty of records were set during the badminton matches at the August 2012 Olympic games in London. The most-ever nations participated (51) and the highest-ever number of nations won medals (seven). To top it off, scores of spectators clamored for tickets, ensuring each game was a sold-out event. Unfortunately for badminton, however, the sport's female participants racked up another milestone, too, when they became part of the first mass disqualification in Olympic history.

During the 2012 Olympic badminton doubles tournament, officials determined two teams from South Korea, one team from China and one team from Indonesia were purposefully losing early-round games so that they could face less competitive teams as the tournament wore on. As a result, the eight players involved were disqualified [source: Associated Press].

When the games began, few would have imagined badminton, a pastime that evolved from a child's game, would cause such controversy. In fact, badminton has been played for centuries in backyards and schoolyards, with most matches ending with presumably little debate.

One of the earliest sports to resemble badminton closely was recorded in 5th century China, where players used fancy footwork to punt a shuttle back and forth. The popularity of the game, Ti Jian Zi, which loosely translates into "shuttle-kicking," spread. Reports of similar games, some involving hands or primitive racquets instead of feet, have been discovered in ancient Greece, classical Japan and colonial India. In fact, children in India could be considered the first badminton aficionados. They played a badminton-like game known as Poona, which was named for a city near Bombay. British Army officers stationed at Indian outposts during the 1600s quickly adopted the game and introduced it others on their home turf.

In England during the 1800s, the game was called battledore or shuttlecock, named for the shuttle that participants batted over a net. It became a favored pursuit of the country's wealthiest classes. When the Duke of Beaufort organized a game on the lawn at Badminton House in Gloucestershire in 1873, it signaled the beginning of the game's modern era. Enthusiasts adopted the badminton name, and by 1934, the International Badminton Federation had been formed. It now counts more than 140 countries among its members [source: CBC News].

So, what are the rules of badminton? Read on to learn more.

Much of a player's badminton success centers on the ability to hit a 2.5-inch (6.4-centimeter) birdie weighing less than a quarter of an ounce. This birdie, also known as a shuttle or shuttlecock, features a semicircle-shaped base made of cork. Traditionally, this cork base is flanked with 16 glued and overlapping goose feathers. Over time, however, the feathers become fragile and break; serious amateurs and professionals may go through more than one shuttle during a match [source: NBC Olympics].

The cone-shaped shuttles used by most backyard players substitute a plastic skirt for real feathers. Whatever the material, the shuttle is an aerodynamic wonder. No matter which part of the shuttle is hit, it will always turn so the cork end travels through the air first.

Whether a player can win a game, however, largely relies on the ability to bat this cork-laden shuttle over the net. Badminton games are won when a player or team of two players reaches 21 points, a relatively new benchmark set by the Badminton World Federation and one used at the 2012 Olympic games. In the past, badminton games were scored to 7, 11 or 15 points. The games are played in best-out-of-three matches [source: Badminton World Federation].

Before you take a swing at a shuttle, it can be helpful to know some of badminton's common terms.

Badminton courts measure 20 feet by 44 feet (6.1 meters by 13.4 meters), and the many lines that mark the playing surface sometimes perplex novice players. The largest court outline is used when playing doubles; an outline 1.5 feet (0.5 meters) inside of the largest outline is used when playing singles. Of course, many backyard matches are played without a clearly marked court at all.

The first time I went miniature golfing, I lined up the ball, gripped the club -- and sent the pitted orb flying across the street. Turns out, there should have been a little finesse involved. The same is true of badminton. Becoming a force to be reckoned with on the badminton court requires mastery, not brute strength, and these three forehand shots are a good place to start.

You'll also want understand the moves that could put you at fault, which means you either lose the serve or lose a point. Here are some common mistakes:

It seems like there's a lot to learn, but people have been playing backyard badminton for centuries. Before long, you may feel like a pro, too, if only at your family reunions.

In my extended family, every reunion includes two things: lots and lots of food, followed by a rousing sports match that usually ends in accidental injury. My nephew sported stitches after standing too close to his sister's golf swing; my sister-in-law fractured a wrist after an unfortunate flag football takedown; my daughter flew off her horse during an impromptu polo match and we collectively discovered that tennis racquets can't stand up to hedge-apple volleys. Badminton, however, is another story. Give us a hastily strung net and a feather-tipped birdie and you'll see soaring, yet pain-free competition. Fantasy football, however, may be another matter entirely.

5 Games You Can Play With Only Pen and Paper
Why Are Today's Lottery Jackpots So Ginormous?
December 8 Birthday Astrology