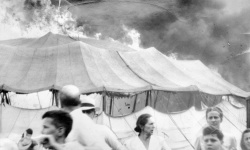 It takes a special kind of person to lose a limb to a wild animal, then climb back in the ring to tempt fate again. Massarti the Lion Tamer was made of such stock. Massarti (an Irishman named Thomas MacCarte) was performing in Bolton, England, with Manders' Menagerie in 1872. Even though he had previously lost an arm in a big cat act at a different circus, accounts at the time paint him as always eager for a show. In fact, the accounts imply that perhaps a bit too much pre-show imbibing inflated his recklessness on the day of his death [source: The New York Times].

Not only were the hot-iron prods apparently out of reach to MacCarte, but he also seemed to have gotten a bit closer to the five lions than trainers normally would. (All this according to the owner of the circus who may have had reason to put blame on a drunken trainer, of course.) When one lion attacked, the others followed suit and some 500 people witnessed the ghastly carnage that led to MacCarte's death — graphic descriptions of which the New York Times eagerly printed.

Ready for another super-sad story about circus animals? This one, you should be warned, involves tragedy for both human and animal.

Tyke was a 20-year-old female African elephant who performed with Circus International. The circus was in Honolulu in 1994 when attendees at the day's performance were surprised to see the elephant enter the ring tossing around what appeared to be a dummy. In reality, it was the groomer that she had severely injured. As the audience panicked, Tyke's trainer was killed during an attempted intervention.

The elephant then fled the ring, where she bounded through the streets of Honolulu for almost a half-hour. The rampaging elephant was shot 87 times by police officers and eventually died from brain hemorrhages and nerve damage [source: Cave]. To the horror of most, news coverage allowed people to watch the chase and death in real time. No exotic animals have appeared at a Honolulu circus performance since, although neither the state nor city officially prohibits it.

It's hard to rank tragedies, and there's no way to call one disaster worse than another. But the Hartford Circus Fire was so damaging and caused the death and injury of so many small children that it's hard not to put it at the top of our circus disaster list.

It was 1944, and the Ringling Bros. and Barnum & Bailey Circus was in Hartford, Connecticut, for an afternoon show in front of several thousand people. A fire started on the roof of the big top, and — with the tent covered in a paraffin and gasoline waterproofing mixture — it spread rapidly. The chaos of the fire resulted in a stampede, and the panic caused clogged exits. Nearly 170 people died, and 487 people were injured. Sixty-eight of those dead were 15 or younger, due in part to the long hours adults worked at war production plants [source: Flood].

No one was ever charged with starting the fire, although some circus officials served time for negligence. An Ohio man did confess to starting the fire in 1950 after being arrested for a series of arson charges, but he later recanted, and investigators didn't get to interview him before he was declared paranoid schizophrenic and sent to a state hospital.

Uh, how about something a little more fun? Listen, circuses may have their issues when it comes to safety or animal and performer welfare. But do check out the related articles for a bit more cheerful circus information and stories.