What was the first circus? 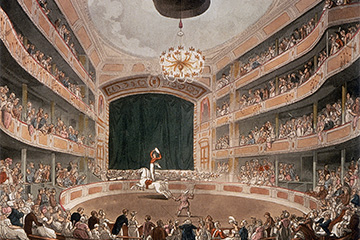 The circus was first established by Philip Astley, who opened the Astley's Amphitheatre in 1777. It was his idea to have the horses perform in a circular ring.
Museum of London/Heritage Images/Getty Images

Clowns juggling bowling pins, elephants parading in full regalia, riders standing atop galloping horses and acrobats performing overhead. Is there anything better than a circus, especially when it's an exercise in excess?

"Why send out a minnow, when a whale will do," said P.T. Barnum, one of America's first circus proprietors, expressing a sentiment that seems particularly apropos. But how did the first circus come about, and why did it lead to the modern three-ring spectaculars we've come to know and love?

Much of the credit goes to Philip Astley, who had served as a cavalry Sergeant Major in the French and Indian War. When Astley returned from the war to London in 1768 and discovered few job prospects at hand, he began offering riding lessons and spending his free time performing tricks atop horses. Word of his equestrian prowess grew, and so did his audiences. So much so, that he began charging admission, constructing viewing areas and offering regular performances.

During his performances, Astley rode -- and often stood -- on the backs of horses walking, trotting or cantering in a circular ring that Astley referred to as a "circus." The purpose for this circular pattern was two-fold: Audiences could view the performance from all angles, which was something a straight line couldn't offer; and the circular movement allowed Astley to take advantage of the centrifugal force that allowed him to better maintain his balance while doing tricks on horseback.

Two years after his trick riding shows began, Astley decided to mix it up by hiring performers -- acrobats, clowns and jugglers -- and adding their acts to his show. The idea became so popular that in 1782, Astley debuted this emerging form of entertainment, known as a circus, in Paris [sources: Jando, Gibbon].

Even though it gets the lion's share of the credit, Astley's troupe probably wasn't the first-ever circus. He encountered similar performances in France when arrived, but Astley's promotional prowess set him apart, spawned competitors and, eventually, created a genre of entertainment -- the traveling circus -- that by the late 1800s had leapt to a developing country known as the United States.

As the circus moves into the future, it continues to change and adapt. Concerns about the welfare of exotic animals have prompted some performers to work only with domesticated animals, and some acts, such as Cirque de Soleil, have opted to forgo the inclusion of animals entirely [source: PBS]. Whatever the philosophy of a particular circus company, one thing is certain: inventive, daring and artistic acts will continue to thrill audiences for generations to come.