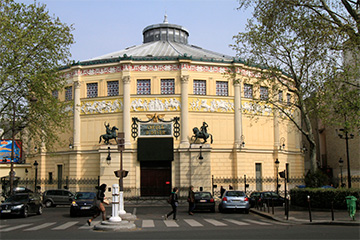 The Cirque d’Hiver in Paris is the world’s oldest continually operating circus venue. It opened in 1852.
Godong/UIG via Getty Images

Although the actual acts may vary, every circus has a core purpose — to astonish its audiences. Whether this is accomplished through exotic animal escapades, high-wire stunts or alarmingly limber performers is up to the circus itself. And, along with the variation in circus attractions comes the variations to a seemingly simple question: What's the world's longest-running circus?

The answer depends on whom you ask. There are touring circuses, family-owned circuses and the world's oldest circus venue, which still offers performances, and they're all vying for a world title.

Take the now-defunct Circo Atayde, for example. Known as the oldest touring circus in the world, it began on Aug. 26, 1888, in Mazatlan, Mexico. The circus toured throughout Mexico, and Central and South America, and was operated by the same family until it came to a close in late 2014. Decreasing revenues and Mexico City's ban on the inclusion of animals in circus acts prompted the closure [sources: Janowitz, Guinness World Records].

Perhaps the title of "world's longest-running circus" now goes to the Ashton Circus of Australia, which has been owned and operated by seven generations of the same family. The Ashton Circus was in operation around 1850, with James Henry Ashton at the helm. He created a legacy in which subsequent generations would continue to ride elephants, tame tigers and lions and perform feats of daring and wonder. During the circus company's peak, nearly 40 family members worked for the enterprise, which included 80 additional employees, more than six dozen animals and equipment worth millions [source: Ede].

And then there's a circus that is arguably a close second, and which further holds the distinction of performing in the world's oldest continually operating circus venue: the Cirque d'Hiver in Paris. With construction completed in 1852, the Cirque d'Hiver exhibits unusual architecture; it is a 20-sided oval polygon with a pale yellow façade sporting elaborately designed reliefs and a main entrance ensconced by sculptures of mounted warriors. The venue was the birthplace of the flying trapeze, when Jules Leotard became the first artist to jump from one moving bar to another in 1859. The circus' long tradition of innovation remains intact, as it continues to operate with new and ever-changing acts [source: Cirque d'Hiver].

Regardless of the criteria, these achievements of these circuses are impressive. They weathered a continually changing world -- and workplace -- to entertain audiences for decades.