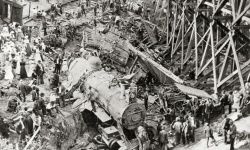 Dozens of people died when a train collided with a circus caravan in 1918.
Public Domain

One of the worst disasters in circus history happened in 1918 when a military transport train collided violently with a circus convoy train occupied by the Hagenbeck-Wallace Circus. The circus caravan had stopped on the tracks between Gary and Hammond, Indiana, to cool an overheated axle. The engineer running the military train had fallen asleep and passed numerous warnings and flares about the stalled vehicle, and the train hit the caravan at 35 miles per hour (56 kph) [source: Borrelli].

The damage was terrible: Since the circus cars were wooden, they were easily crushed to splinters, and the kerosene lamps that lit them quickly ignited a conflagration that trapped and killed dozens of people. Five cars were heaped on top of each other, and at least 187 people were injured and 86 killed. The fire proved so devastating that it was impossible to identify the remains, and somewhere between 53 and 61 unrecognizable bodies were buried in a mass grave near Chicago [source: Borrelli]. Large elephant statues mark the plot (called Showmen's Rest) as a monument to all the performers buried on the spot. All the Hagenbeck-Wallace animals were on an advance train, and none were hurt in the collision or fire.

Listen, stories of performers meeting their ends in terrifying ways is not everyone's cup of tea, but the fascination is understandable. But forewarned is forearmed: If you're sensitive to tales of helpless animals destroyed in grisly disasters, this entry is not for you. It's one of the most harrowing tales of circus animal horrors, and the descriptions are graphic.

In 1942, the Ringling Bros. circus was staked out on Cleveland's lakefront when a fire started on top of one of the wooden animal cages. As horrified spectators watched, more than 50 animals were burned alive [source: Ludington Daily News]. Some, including an elephant and giraffes, wrenched free from their tethers and had to be shot by riot police after running free. As the fire spread and emergency responders showed up, a crowd of 5,000 gathered [source: Ludington Daily News]. The newspapers from the time are not shy with descriptions; suffice it to say here that the animals didn't meet swift or painless deaths.

And while we don't have a cheerier topic to transition to, let's at least move on to a circus disaster that only resulted in one tragic death.

We'd like to think that there are some "safer" circus acts out there that aren't as inherently dangerous as others. Like clowning, for instance — how much trouble can one of those guys get in? Besides a strong stream of water to the eye, it seems fairly safe. And while we all know that riding horses has its risks, it does seem a bit more controlled than flying through the air without a net to catch you.

Until, of course, it isn't. Otto Kline, a 28-year-old trick rider with Barnum & Bailey's Circus, died in 1915 during a packed performance at Madison Square Garden in New York. Included in his act was a vaulting stunt, where he would grip the pommel to vault himself side-to-side over a galloping horse, all without touching the saddle.

Unfortunately, Kline seemed to lose grip at one point and was flung head-first into boxes in the ring. If you're really feeling cold, try not to get a little choked up at the New York Times article that describes his horse "stopped almost in her tracks ... [where she] seemed to realize that something terrible had happened to her master."

Cirque du Soleil has always been known for its extremely high levels of artistry and safety. Before 2013, the circus hadn't suffered a fatal on-stage accident in its 29-year history [source: Nestuck]. Unfortunately, that record was broken by a terrible tragedy that occurred in Las Vegas during a performance of its Vegas staple, "Ka."

Sarah Guyard-Guillot was a 31-year-old aerialist performing in the final battle scene of the show. She was wearing a motorized safety harness, but she ascended too quickly at one point and struck a catwalk above her. The cable jumped from the pulley wheel of the harness and was cut by a sharp edge. Guyard-Guillot fell more than 90 feet (27.4 meters) into an open pit below the stage while onlookers watched in confusion [source: Katsilometes]. She died of her injuries en route to the hospital.

A new safety system was installed to lift performers more gradually, and the act eventually returned to the stage after a hiatus of 18 months. It's still performed five nights a week at the MGM Grand in Las Vegas.