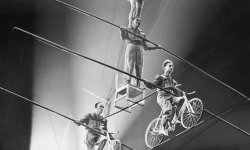 The Flying Wallendas, a daring acrobatic troupe, are no strangers to tragedy.
© Bettmann/Corbis

Circuses are widely known as dangerous places. In fact, that's part of the thrill, isn't it? Nobody is interested in going to a circus that promises a subdued time. Instead, we want to be on the edge of our seats, ready to gasp in awe at the stunts performed or the ferocity of the animals.

Unfortunately, that also means things can go very wrong at the circus. If the whole conceit of a show is cheating danger, you better believe that occasionally danger is going to win. And while it may seem like tales of circus woe are edging toward harmless, it's worth pointing out that the disasters we'll discuss in the following pages are no trifling affair simply because they took place in a fun setting. There's some pretty horrific traumas in circus history, and we won't be shy.

But let's start with a modern circus disaster that, while horrific, didn't result in loss of life.

Sometimes it's best to ease into things. And while most of us wouldn't consider a handful of people gravely injured a "gentle" way to start a list, we've got a lot of pretty gruesome circus disasters to go. So let's at least start with a circus disaster that spared people their lives.

In May 2014, eight acrobats were performing a hair-hanging stunt in Providence, Rhode Island, as part of a Ringling Bros. and Barnum & Bailey Circus act. (One performer was standing below.) About 3,900 people watched as the acrobats formed a human chandelier, all hanging by their hair from a round ring [source: AP]. The steel fastener that held the ring in place snapped, causing all acrobats to plummet 15 to 20 feet (4.6 to 6.1 meters) below and injure the grounded performer. Two of the acrobats had spinal cord injuries, five had fractures, one sustained a lacerated liver, and the grounded performer was also injured [source: Ellement].

Luckily, none of the injured performers died from the fall, and the U.S. Occupational Safety and Health Administration fined the circus $7,000 for failing to properly install the rigging used during the act. By November 2014, two of the acrobats had returned to work [source: Ellement].

Not to take away from the horrible tragedies that have befallen the Wallenda circus family, but when you get your famous nickname ("the Flying Wallendas") from a reviewer who was describing an accidental fall, albeit a graceful one, it doesn't bode well [source: Cox]. If given a choice, most of us might decide on a nickname from a stunt gone right. But the Wallenda family — circus folk since the 18th century — may as well take on a name with a rough and tumble origin, as they've had some circus disasters that live in infamy.

In the 1930s, Willie Wallenda fell to his death doing a bicycle stunt on a high wire. In 1945, a Wallenda sister-in-law died from a 50-foot (15.2-meter) fall while doing a headstand on a pole. In 1972, a Wallenda son-in-law was shocked by a live wire during an act and died from the subsequent fall [source: Cox]. One of the worst Wallenda accidents happened in 1962, when a seven-person human pyramid collapsed from 35 feet (10.7 meters). Two people died, and one was paralyzed [source: Detroit Free Press]. But the Wallendas took their show business roots seriously, and the remaining members performed the next day.

In 2004, a terrible accident claimed the life of Dessi Espana, a 32-year-old circus performer. Espana worked with the Ringling Bros. and Barnum & Bailey Circus as an aerial silk performer. The troupe was performing in St. Paul, Minn., when one of her scarves gave out, and she fell 30 feet (9.1 meters) to the concrete floor [source: USA Today].

As if it couldn't get more horrifying, Espana was given medical attention on the floor as clowns came out as a kind of distraction from the emergency. The show continued on after Espana was taken to the hospital, but she died of her injuries later that night. The Espana family continues to perform at the circus, including Espana's daughter Zore, who was 7 years old at the time of her mother's death.

You might be surprised to know that nets are not often used in aerial acts without swings. The equipment they use (like the scarves Espana employed) are at risk for getting caught in a net, and performers who aren't flying through the air don't have the time to "plan" a net fall [source: Angels in the Air].