by John Perritano
Prev NEXT
1 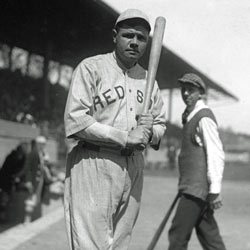 Jan. 5, 1920. Harry Frazee held a press conference to announce that the Red Sox had sold Babe Ruth for cash to the New York Yankees. "The price was something enormous," Frazee said, refusing to name the figure. "It was an amount the club could not afford to refuse" [source: Shaughnessy].

"Prohibition was 11 days away when Frazee made this move, which would drive Sox fans to drink," sportswriter Dan Shaughnessy wrote 70 years later in "The Curse of the Bambino." "Ruth became the foundation for the greatest dynasty in the history of professional sports" [source: Shaughnessy].

No matter how you slice it, no matter how many arguments you get in, the worst trade in baseball history, nay, the worst trade in sports history occurred on that cold January day in 1920. It's not as if the Red Sox did not know what they had in Ruth. For six years, Ruth tallied some remarkable numbers. He was a stellar pitcher, winning 18 games in 1915; 23 a year later; and 24 in 1917. He batted above .300 in four of those six years [source: Baseball Reference].

Yet, it was with the Yankees that Ruth would achieve his iconic status. He became a full-time outfielder, leading the Yankees to four World Series victories and becoming baseball's home-run king. He hit 60 homers in 1927 and 714 during his career. Ruth was larger than life. He was famous on and off the field, a superstar before there were superstars, a cultural icon before there were cultural icons. His talent on the field saved baseball after the 1919 Black Sox scandal threatened to ruin the game.

Or, perchance, they're just teasing their fans.

Many people will argue that other trades were worse than some I've listed here. That's OK. We can argue for hours. That's the true joy of baseball. Also, if I seem a little hard on you Red Sox fans, don't take it personally. Many of my friends are Red Sox fans. I love going to Fenway, and Boston is one of my favorite cities. I've spent a lot of time in the North End where history and food, two of my favorite subjects, collide. The Boston Globe has the best sport section in the world. Yet, if there's one thing Boston fans can take solace in, it's that they're not Cub fans.