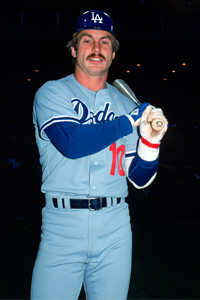 The Penguin (aka Ron Cey) poses with what appears to be an aluminum bat during his Dodger days in 1979. See more sports pictures.
Michael Zagaris/MLB Photos via Getty Images

In the early days of baseball, all bats were made of wood, usually ash, which meant they performed consistently. If a player blasted a ball farther, you could identify the person's swing technique or physical strength as the underlying cause. Then, in the 1970s, aluminum bats began pinging their way across diamonds and, almost immediately, observers wondered if a batter's metal mattered more than his mettle. Despite the controversy, aluminum bats became a mainstay of amateur baseball as manufacturers, such as Louisville Slugger and Rawlings, introduced full lines of metal and composite bats.

In competition, some of these bats led to wicked hits that caused serious injuries and even death. In 2003, American Legion pitcher Brandon Patch died when a line drive off a metal bat struck him in the temple. Similar tragedies occurred in 2005 and 2006. All of these incidents stirred debate and discussion, but they didn't prove, objectively and quantitatively, whether aluminum bats hit balls harder, farther and faster than wooden bats. Luckily, science has been able to provide some important insights on the topic.

First, let's start with what makes aluminum bats so different in the first place. The biggest difference, besides the metal-vs.-wood thing, is that aluminum bats are hollow, while wooden bats are solid. If you cut an aluminum bat along its length, you would find a thin-walled barrel surrounding a cavity of air. The only solid part is the handle, which is filled with a black, rubberlike material. That means you can make aluminum bats longer without making them unnecessarily heavy. Experts refer to this characteristic as a bat's drop -- its weight in ounces minus its length in inches. Aluminum bats often have drops of -3 (30 ounces minus 33 inches, for example). Wood bats can have drops of -1 or -2 (30 ounces minus 31 or 32 inches).

Another key difference is the location of a bat's center of mass (CM), or balance point. Because an aluminum bat has a hollow barrel and a solid handle, its CM shifts closer to the handle. A wooden bat is solid through and through, so its CM tends to be located much farther down the barrel, closer to the end. The shift of the balance point closer to the handle causes aluminum bats to have a much lower moment of inertia, a term describing the tendency of a body to resist angular acceleration.

As a result of these differences, aluminum bats are much easier to swing when compared to wooden bats of the same length. In fact, increasing the velocity of the bat increases batted ball speed, or BBS, much more than increasing the mass of a bat. According to some research, doubling the weight of a bat increases BBS by about 17 percent. Doubling the swing speed, however, leads to a 35 percent increase in BBS. In fact, for every mile (1.6 kilometers) per hour you add to your swing speed, the ball travels an additional 8 feet (2.4 meters) [source: Coburn].

But that's not the end of the story.

It's Not Just Weight: Aluminum vs. Wood

Aluminum and wooden bats behave quite differently when they strike a ball. Both types of bats vibrate at the moment of impact, but wooden bats do so in one direction only -- along their length. These low-frequency bending vibrations dissipate much of the energy associated with the bat-ball collision, which means wooden bats don't return as much energy to the ball.

Aluminum bats vibrate in two directions -- along their length and radially as the metal shell squeezes in and then contracts out. This second class of vibrations occurs in a set of frequencies known as hoop modes. The fundamental frequency, or first hoop mode, acts like a spring during collision, compressing in and then expanding out and returning a large amount of energy to the ball. This "trampoline effect" is another reason why aluminum bats lead to higher batted ball speeds.

The bottom line: Non-wood bats do lead to higher batted ball speeds and, as a result, to harder line drives and deeper fly balls. But there's an, ahem, aluminum lining to this story: The process used to manufacture metal bats can be tightly controlled. By fine-tuning their alloy selection and manufacturing processes, companies like Rawlings and Louisville Slugger can produce metal bats that perform more like wood bats. Since 2011, when the NCAA implemented a new standard effectively requiring non-wood bats to produce batted ball speeds no greater than wood, batting averages, home runs per game and earned-run averages are the lowest they've been in more than 30 years [source: Russell].

One of the arguments for aluminum bats is that they cost less to own, primarily because they don't break. But what about environmental costs? I wonder which bat-making process has a lower carbon footprint? Might make an interesting sidebar to the controversy.