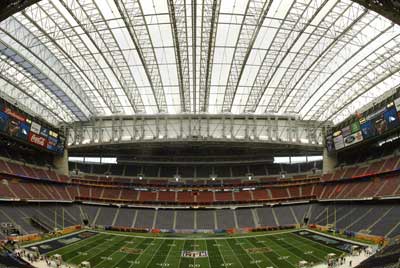 Ballparks are just as trendy as clothes and hairstyles. In the 1960s and '70s, many cities built doughnut-shaped multipurpose stadiums. It was also the era of the domed stadium. We were in awe of the immensity of the Astrodome in Houston and the Kingdome in Seattle. Today, a new trend in stadiums has led to the demolition of the Kingdome and the likely demise of the Astrodome. The latest trend in sports stadiums is the retractable-roof stadium.

These new convertible stadiums allow athletic fields to be covered during inclement weather, but can be opened to allow the sun to shine in on fair weather days. This new type of stadium has all but killed off the idea of artificial turf stadiums, which cause a greater number of injuries than natural turf. Retractable roofs are an idea whose time has come, but just how do they work? There's no single answer to that question because no two retractable roof stadiums are exactly alike. Let's look at a few of these convertible stadiums:

Retractable roofs are really marvels of modern architecture. They are designed to move panels that weigh millions of pounds in just minutes. By doing so, they give fans a new experience at baseball and football games. Given their popularity, it's likely we will see many more of these convertible stadiums built in the next decade until they are replaced by the next stadium trend.