by John Perritano
Prev NEXT
10 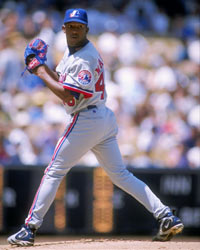 Martinez won 55 games and lost 33 in four seasons with the Expos, winning the first Cy Young Award (given to the best pitcher in each league) in 1997. He posted a diminutive 1.90 ERA (that's very good for you non-baseball fans) that year. In 1998, the cash-strapped Expos sent Martinez to Boston for Carl Pavano and Tony Armas Jr. By that time, the Expos could not afford to pay Martinez and would have lost him to free agency anyway [source: ESPN].

Why did the Dodgers trade Martinez? That question still has Dodger fans scratching their heads. Surgeons repaired the young right hander's left shoulder in 1992 after Martinez dislocated it swinging a bat. When Martinez came back the following year, he made 65 appearances for the Dodgers, posting a 10-5 record. He struck out 119 batters in 107 innings. Dodger management obviously thought the injury was too great to keep Martinez around [source: Newhan].