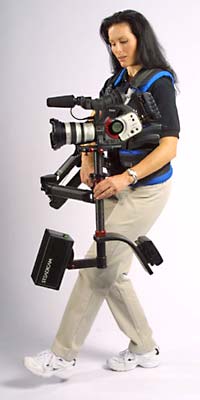 Operating a Steadicam is one of the most difficult jobs on a movie set, but perhaps one of the most rewarding. For a typical Steadicam shot, a camera operator must follow a predetermined path, while simultaneously adjusting the camera and avoiding any obstacles, all the while supporting more than 70 pounds (32 kilograms) of camera equipment. (The Ultra2 model's iso-elastic arm has a camera capacity of up to 70 pounds.)

The job requires a good deal of physical stamina, technical skill and a good sense of shot composition. The director plans the shot, but the Steadicam operator makes it happen.

The best technique for Steadicam operation depends on the nature of the shot. To film a simple conversation between two actors, an operator may try to replicate the even feel of a dolly shot, keeping the camera perfectly level and moving it slowly around the action. For a "flying sequence" over low ground, the operator might intentionally tilt the camera from side to side, creating a soaring effect.

One of the most common uses of the Steadicam is to track actors as they move around obstacles or rough ground. Typically, the operator will walk ahead of the actors, shooting them from the front as they walk and talk. For this sort of shot, the operator may walk backward through the scene, with the help of other crew members. Or he or she may walk forward, with the camera pointing behind him or her. Or, heck, he or she may hop on a Segway traveling at a good clip, dismount, sprint up a ramp and then do a 360 around the point of interest (see the related YouTube video here). For these shots, and most any other, the director, the crew and the operator will all work together to figure out the best approach.

Many professional Steadicam operators work freelance, renting themselves as well as their equipment out as a complete package. When a scene in a film calls for a Steadicam shot, the filmmakers will select an experienced operator based on his or her past work. Many established Steadicam operators are members of the Steadicam Operators Association (SOA), founded in 1988 by Garrett Brown. In addition to representing hundreds of Steadicam operators, the SOA holds regular training workshops. Tiffen, the company that manufactures Steadicams, also organizes training sessions.