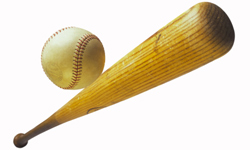 While there are many Great Baseball Debates (DiMaggio vs. Mantle, league vs. interleague play, Cracker Jacks vs. peanuts), one that has raged on for centuries is who actually invented baseball. Was it the French? The same Brits who gave us cricket (as we'll see later)? Or was it purely a game invented by hardscrabble but lovable street urchins playing stickball in the Bronx?

That's a topic for another article. Let's avoid controversy and focus on a few games that may not have been the origin of America's pastime, but they at least bear some similarities to it -- and they just might have influenced the rules of the game.

All of these games involve at least a ball and a bat, but many of them resemble baseball in more than just comparable equipment. Read ahead for examples of ball-and-bat games that Shakespeare, the Egyptians and the Vikings have played, along with a few games with historic roots that dandies of our day still compete in.

5: Take Me Out to the Stoolball Game 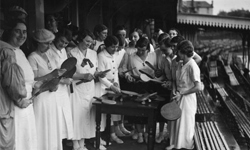 Players admire a collection of stoolball bats from around the world.
A. Hudson/Hulton Archive/Getty Images

The rather unappealingly named stoolball is cited as precursor to both the modern baseball game and cricket. The game has been cited as being played from at least the 14th century, but it still manages to be more progressive than baseball: the game was played by both men and women. ("Playing stoolball" was even used by Shakespeare in "The Two Noble Kinsmen" as a sexual euphemism.)

The game is simple but requires some props that make it pretty fun. First, set a Home stool (yup, an actual stool, but a chair will do). About thirty feet (9 yards) away, put another stool, called the Base. The batter stands about six feet in front of the Home stool. The pitcher stands near the Base, and throws underhand, attempting to hit the Home stool. The batter makes a valiant attempt to hit the ball away from the stool with a bat.

If the batter hits the ball, he or she can run to the Base, around it, and back Home. Meanwhile, the pitcher is trying to field the ball and throw it at the stool. If the batter reaches Home before the pitcher can hit the stool, a run is scored. Whoever has the most runs wins. As we'll see on the next page, this bat-and-ball game is also suspiciously similar to a contemporary activity still popular today. 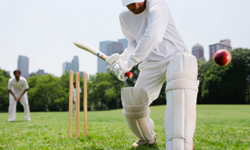 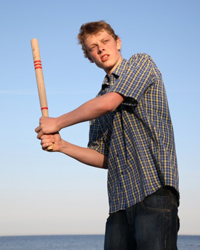 Peter Piccione, a professor and Egyptologist at the University of Charleston, S.C., might have discovered the very first bat-and-ball game to predate baseball. He found evidence that seker-hemat (which roughly translates as "batting the ball") was played by kings during festivals in ancient Egypt.

No one is entirely sure what sekar-hemat entailed or how the Egyptians interpreted the infield fly rule, but Piccione can extrapolate a few things from ancient art and literature. He thinks that the overall goal of the game was to hit and destroy the evil eye of Apopi (which would surely engage even those usually bored by the third inning), but it's also clear it was a game to enjoy. He thinks that umpires and base running were probably involved. There's also a veritable star slugger -- Thutmose III, who was a military man who was the topped the slugging percentage in the year 1472 BC. And that was a thousand years after Piccione first finds what he thinks is a reference to seker-hemat in Egyptian texts.

So next time you're at bat, instead of calling your shot, give Thutmose III a nod instead, and vow to destroy the evil eye of the other team.

Sure, the Vikings are known for pillaging and plundering, but did you realize they could also be responsible for the invention of the passed ball? Admittedly, it's unlikely. But the Vikings did invent and play a bat and ball game that echoes some rules of America's pastime while still keeping the bloody, violent Viking reputation firmly in place.

Most of the mentions of Knattleikr come from Icelandic sagas and a few reports of games. Unfortunately, a lot of details aren't known. But what we do know is that Knattleikr was played with a hard ball that was hit by a stick and that using your hands was also allowed. Two opposing sides fought for the ball (which was probably hit back and forth), and the fights were often gory messes. Beleaguered Viking parents complained about their sons coming home bloody and bruised.

Just like pitchers who dread facing Josh Hamilton, players also relied on their status to daunt the opposition. They even resorted to some trash talk to puff up their game. And while it seems like baseball can sometimes last an eternity, Knattleikr could go on for days -- even when someone got so angry with an opponent they resorted to killing them, which is mentioned in the sagas. From what is told, it appears that games ended when everyone got tired -- or only one man was left standing.