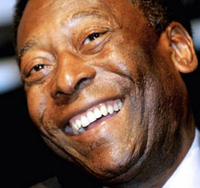 Even the most casual soccer fan has probably heard of Pelé. The Brazilian star played for club team Santos, but truly made his mark in international competition. Hitting his peak in the 1970 World Cup tournament, Pelé led Brazil to victory in what is considered by many one of the greatest displays of soccer in history. He finished his international career with 96 goals, and ended his career in the U.S.'s NASL (North American Soccer League), playing for the New York Cosmos [Source: Hunt]. His skill and fame single-handedly elevated the popularity of the sport in the United States.

The single most dominant player in women’s soccer, Mia Hamm’s legacy includes not just a record for most international goals that may never fall (158 of them in 275 games), but a legion of American girls who discovered a love for soccer and a role model for strength and perseverance.

England’s Bobby Moore is practically a saint in his home country. The fullback captained his national team to a 1966 World Cup victory and gave a heroic but futile performance in 1970 against Pelé’s Brazilian team [Source: Hunt]. A virtually unbeatable defender, Moore was also adept at setting up offensive strikes with long, accurate passes.

Maradona’s dribbling skills and eye for open space made him the most stunning player in the world in the 1980s. Despite a career overshadowed by drug scandals, he led his home nation of Argentina to a World Cup victory in 1986. That tournament included the infamous “Hand of God” goal, in which Maradona appeared to have headed the ball into the net. He later admitted that he had partially used his fist to punch it in.

For lots more information on soccer, other sports and related topics, check out the links below.