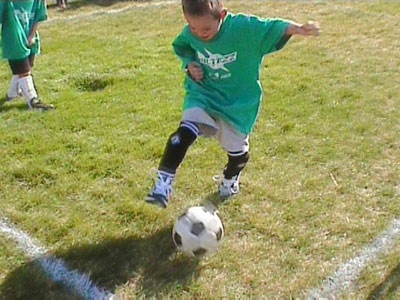 Although any part of the body other than arms and hands can be used to play the ball in soccer, it's mostly a kicking game. Forceful, accurate passes can be made using the inside of the foot. More advanced players can make sudden shots with the outer edge of the foot, and can even use this technique to put spin on the ball, making it curve (or bend) in the air. When the ball bounces into the air, it can be struck with the head.

Individual players may "dribble" the ball with their feet to move it forward, but it is generally more efficient to pass the ball. One common offensive technique has an attacking player carry the ball at high speed down the sideline, toward the opponent's corner. Meanwhile some of his teammates run toward the front of the goal, being careful to stay onside. The player with the ball attempts to time a long cross pass to the front of the goal so that it reaches there just as the other players do, giving one of them a chance to kick or head it into the net.

Aside from the goalkeeper, the other ten players are divided up as forwards, mid-fielders (or halfbacks) and defenders (or fullbacks). The specific arrangement of players is up to the coach -- there are no rules dictating how many fullbacks, midfielders or forwards must be present. A given team's positioning can be described by three numbers indicating how any of each kind of player is on the field, starting with the fullbacks. So a team playing a 4-4-2 formation would have four fullbacks, four midfielders and two forwards.

Fullbacks generally stay behind their teammates, making sure the opponents are unable to generate scoring opportunities. When their goal is under attack, they will 'mark' an opposing player and stay close to him to keep him from receiving a pass. However, many teams have had success with fullbacks who occasionally make surprise attacks. Midfielders have a difficult job, as they must support the fullbacks in their defensive duties, but also control the center of the field and set up scoring chances for the forwards. Forwards tend to play in the opponent's half of the field, always working to bring the ball closer to the net for a shot at the goal.

Some formations use a sweeper, a fullback who covers a wide area in front of the goal. Alternately, a striker may be used -- this a forward who is devoted almost solely to attacking, constantly driving up the middle toward the opponent's goal in hopes of receiving a cross pass.