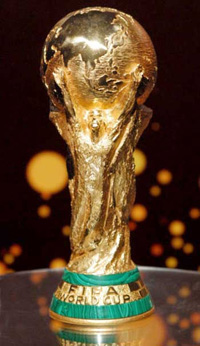 Soccer has grown to enormous levels of popularity since World War II, and FIFA has more member nations than the UN. The quadrennial World Cup tournament sets off a wave of soccer mania that encompasses the entire world. With that kind of popularity comes the chance for big profits.

The average annual salary for a player in the English Premier League was about $1.3 million as of 2006 (based on May 2007 exchange rates). Lower-tiered leagues have lower salaries, but the average salary in England’s fourth division is still almost $90,000 [Source: The Sport Independent]. British Sky Broadcasting paid $1.77 billion for the rights to broadcast English Premier League games [Source: BBC]. England is a hotbed of football, though, and in countries where the sport is not quite as popular (or the economy can’t support such huge salaries), players earn considerably less. Players in the U.S.’s MLS make more than they did just a few years ago, but the numbers don’t compare to the money made in European leagues. A few players earn salaries with six digits, but some earn as little as $11, 700 per year, the league minimum [Source: The Washington Post]. Those players would almost certainly need to hold a second job to make ends meet.

Soccer’s legions of fans show their team or national pride in different ways around the world. They wear the team colors or paint them on their faces. Many international matches feature a great deal of flag waving in the stands. Unison chanting or singing is popular in Europe, with certain songs being associated with particular teams. Perhaps most famous is “You’ll Never Walk Alone,” sung by supports of Liverpool F.C. In some countries, fans light flares or even start celebratory fires in the stands, obviously dangerous practices.

The dark side of soccer is revealed by hooligans, fans whose behavior escalates to violence and vandalism. Some hooligans are fans who take devotion to their favorite team too far, attacking opposing fans and destroying property. Other hooligans have little interest in the sport and simply use it as an outlet for their antisocial tendencies. Hooliganism has been curbed by fierce crackdowns in Europe, with known offenders banned from attending matches (or even from traveling to the place where a match is being held), and teams being harshly penalized for the misbehavior of their fans. Club penalties include loss of league points or being forced to play matches in empty stadiums, denying the team any ticket sales revenue.

Even without malicious intent, the huge crowds at soccer matches can turn deadly. Stadium collapses and stampedes caused by overexcited fans have caused thousands of deaths. In 1946, an FA Cup match was played in Bolton, England with dead bodies lying along the sidelines after a barrier collapsed. Over 300 were killed during riots at an Olympic qualifier between Peru and Argentina in 1964. A stampede in Moscow in 1982 killed 340 people, and Britain’s worst football disaster occurred in 1989 when 96 fans were crushed in a stampede prior to an FA Cup match [Source: Hunt].