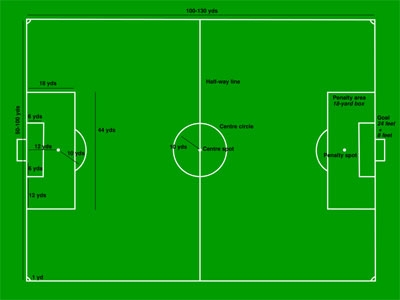 Soccer is perhaps the most elemental team ball sport. Two teams, each with 11 players (including the goalkeeper) work to push a ball into the opposing team's goal using any part of their body other than their hands or arms. At the end of two 45 minute periods, whichever team has scored the most goals wins the game. Direct physical contact (pushing, checking, grabbing, etc.) is not allowed.

Matches are played on a field (often called a pitch) marked off on all four sides with white boundary lines. A typical field is 100 yards long and at least 50 yards wide, although some fields are larger. If the ball goes across the line on the sides of the field, it is returned to play via a two-handed overhead throw-in, the only situation where a non-goalie player can use his hands. If it goes out of play across an end line, it's returned to play by the goalie kicking it (if the offensive team played it out) or by a corner kick by the attacking team (if the defenders played it out).

The goal is eight yards long and eight feet high. The ball must completely cross the end line between the goal posts to be counted as a goal. Directly in front of each goal is a large rectangle called the goal area. If a defending player commits a foul within this area, the attacking team receives a penalty kick. This is a free shot at the goal with only the goalie to defend it, from a distance of ten yards.

Fouls committed elsewhere on the field can result in a variety of penalties. Minor offenses, such as inadvertently touching the ball with the hands, tripping or holding an opponent or kicking at the ball while it's up in the air and dangerously close to people's heads results in a free kick for the other team. This change of possession usually happens quickly and keeps the game moving along.

More flagrant fouls can result in cards. Severe or repeated fouls, fighting, disrespecting the officials and intentional fouls give the referee the option of issuing a yellow card to the offending player. This is like a warning - the ref takes an actual yellow card out of his pocket and holds it in the air to let everyone know it's being issued. He then writes down the player's number in a notebook. A yellow card has no immediate effect, but if the same player receives another yellow card in the same game (and sometimes within the same tournament), he gets an automatic red card. A red card results in ejection from the game, and that player's team can't replace him, forcing them to play short-handed for the remainder of the match. Extreme offenses can result in an immediate red card, whether or not a prior yellow card was issued.

The goalie can freely use his hands to catch, block and throw the ball within the goal area. He can move beyond the goal area, but must use his feet to move the ball.

The clock in a soccer game is continuous. If play stops due to an injury or other delay, the referee keeps track of the lost time. At the end of each half, the referee will add on this extra time, known as injury time, after the clock has run out.

If a game ends in a tie, the decision will depend on where and why the game is being played. In friendly matches and regular league games, the game simply ends and each team is credited with a tie, worth one point in league standings. In some tournaments, teams play two games against each other (several days apart) and the winner is determined by total goals scored. That can make a tie as bad as a loss for a team already behind on goals. In some tournaments, a tie is resolved with a shootout. This is a series of five penalty kicks, with teams alternating kicks. The team that scores the most goals with their five kicks wins.

The soccer ball itself is an inflated sphere made of synthetic leather. Real leather was used in the past, but has a tendency to absorb water, making the ball very heavy in wet conditions. Most balls are covered with stitched panels. Inside is a fabric liner and a rubber bladder which holds the air [Source: Soccer Ball World].

Soccer players wear minimal equipment. Shin pads and cleated shoes for traction on natural grass make up the gear needed by most players. Many goalies wear gloves for padding and grip, and goalie pants and shirts may have padded panels sewn in for protection when diving onto hard ground to make saves.