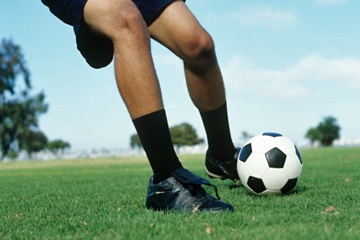 Keep your footballing dreams alive by starting your own soccer club.
Stockbyte/Thinkstock

The popularity of soccer has boomed in the United States in recent years, prompting the rest of the world to ask, "What took you so long?" Major League Soccer is gaining attendance and youth and adult leagues are sprouting up like grass on a pitch. And thanks to strong showings by both the men's and women's national teams, soccer is crossing gender lines like no other sport in the United States.

If you want to bring the sport to your own backyard, the first thing you need to do is put the word out and make sure you have enough interest to get at least four teams together. Social networking is a great place to start, and you can always place notices on bulletin boards at community centers, as well as in the classifieds of your local paper.

Then, you'll need to look for space to play. Check with your local parks and recreation department for available fields and rates. Next, you'll want to put a budget together to figure out what your costs will be to run the league. You may have to front some cash, but charging players a fee will help cover the costs. You can try to offset some of the player's costs by getting businesses to sponsor teams in exchange for a large logo on the back of the team jersey and maybe a banner or two at games. You'll probably need to pay something for your field time and you'll also need money for equipment, like balls and knee pads. Hopefully, you'll be able to find a soccer field that is already lined and has nets and goals, but if not, you'll need this equipment, too. It's good to have a manager for each team who handles fees and setting the roster. You'll also need to budget for referees for each game. And it's not a bad idea to have an insurance policy. In fact, some cities or towns may require it, so don't forget to include that as a line item in your budget.

If you find you have some skilled team members who are interested in getting more involved in soccer, you may want to branch off and start a travel soccer team. Travel teams are considerably more competitive than recreational soccer and require a larger commitment from team members.

In a travel soccer situation, you're playing teams from other cities or towns and generally, at least half of the games are played at the opposing team's field, rather than at a community center or park like in a recreational league. Traveling out of town is not only a larger time commitment for your team, but it also means some additional costs will be incurred, like gas, meals and possibly even hotel rooms, depending on how far away you'll have to go to compete.

Get Your Bubble On. No, Really.
How Olympic Timing Works
What exactly does a boxing promoter do?