Job Description of a Recording Engineer 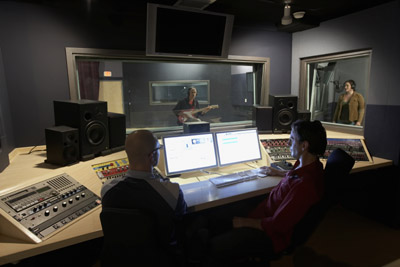 The job of a recording engineer is not only to record audio, but to edit and mix it in such a way as to make the audio sound the best it possibly can. During a recording session, he must listen to audio from both a musical and a technical perspective, looking for ways to adjust the equipment, recording levels and even the performance of the artist in such a way that the recorded product sounds perfect [source: YouTube].

The first job responsibility of the recording engineer is to make sure that all of the studio equipment is working correctly and that it's properly set up for the recording session. The most basic goal of a recording session is to get a clean recording of the audio. If equipment isn't functioning properly -- and that includes everything from microphones to computer software -- then you're going to waste the client's money on lousy recordings or downtime in the studio.

Depending on the size of the studio and needs of the client, setup itself can get pretty elaborate. Often an assistant recording engineer will be hired to handle pre-session tasks like running cable, checking mikes and setting up baseline levels on the control panel and in Pro Tools before the client arrives.

Once the client arrives, it's the responsibility of the recording engineer and his assistants to help the client get all of its equipment set up in the studio and prepared for recording. Most of this setup is devoted to microphones. Drums, for instance, require many individual microphones that need to be placed in specific spots and at specific angles to ensure the best sound quality. Same goes for guitar amplifiers. Then each microphone needs to be assigned a level to ensure a nice balanced sound coming out of the studio monitors.

Some engineers see their job as experimenters, trying dozens of different microphones and microphone placements until they achieve an entirely original sound. Others just push the faders, press record and play a much more secondary role. It all depends on the personality and working style of the engineer and the relationship with the client.

Once all of the audio has been recorded, it's the job of the recording engineer to edit and mix the audio, also known as audio post-production. The mix is where the engineer takes all of the individual audio tracks -- instruments, vocals, other sound sources -- and assembles them into a balanced, musically appealing whole [source: YouTube]. Today, mixing is done almost exclusively on a computer with audio editing software like Pro Tools. In larger studios, mixing is handled by a special mix engineer who works separately from the recording engineer.

In the next section, we'll look at some of the essential skills for being a successful recording engineer.