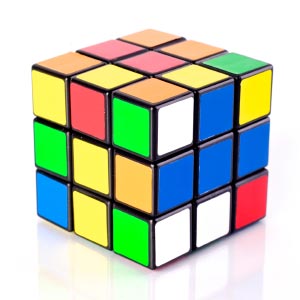 The Rubik's Cube is a 3-D variation of the sliding puzzle.
©iStockphoto/Chris Hutchison

Sliding puzzles come in just about every shape and form that you can imagine. There are literally thousands of variations. Some are actual mechanical puzzles, others are computerized versions. The most basic ones require you to assemble a pattern. It could be a picture of a cat, a flower or a painting like Grant Wood's "American Gothic." The image is divided into nine sections with one section missing, the pieces scrambled in a 3-by-3 grid. Your mission is to reassemble them in the right order. Harder versions divide the picture into 25 pieces in a 5-by-5 grid.

In addition to these basic sliding puzzles, which are variations on the original 15 Puzzle, puzzle inventors have come up with some intriguing and highly challenging designs:

New and increasingly tricky sliding puzzles are being invented all the time. At this point, it looks like slider fans will never run out of challenges.

Read on to find out the one secret that will help you to solve any sliding puzzle.