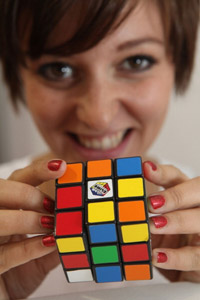 To the average American, the word "puzzle" conjures up a single image: the jigsaw puzzles we wrestled with as children during rainy days. While there is undoubtedly some art and strategy to jigsaw puzzles, they are, by definition, a little flat. True puzzle aficionados know that there's a whole universe of three-dimensional puzzles and riddles -- some made out of wood, others out of metal, plastic or even fabric -- that boggle the mind and delight the senses. Jerry Slocum, one of the foremost puzzle historians, calls these 3-D puzzles mechanical puzzles.

The Rubik’s Cube is easily the most famous mechanical puzzle. Invented by Hungarian architect and professor Ernö Rubik in 1974 as the Magic Cube and introduced in America in 1980 as the Rubik’s Cube, the six-sided puzzle has sold 350 million units, making it the most popular toy in history [source: Rubik’s]. The Rubik’s Cube is an example of what Slocum calls a sequential movement puzzle. With a lot of practice, a solver can learn the algorithms, or sequence of set movements, to move any piece of the cube to any other position.

Another example of a mechanical puzzle is the puzzle box, an intricately crafted wooden box that can only be opened through a series of precisely executed moves. Although many countries lay claim to their own puzzle box traditions -- including Czechoslovakia, Morocco and Puerto Rico -- some of the most difficult boxes come from Japan [source: Slocum]. Most Japanese boxes only require six moves to open, but some very large boxes require 125 separate moves to solve -- and cost thousands of dollars to buy [source: Puzzle Box World].

Japan and China have birthed many 3-D puzzles. Tangram puzzles -- a square divided into seven different pieces that must be reassembled in specific shapes and patterns -- became wildly popular in China in the early 1800s before moving West. The Japanese also invented Kumiki puzzles, some of the first 3-D interlocking puzzles to take on the shapes of animals and other objects [source: Cleverwood]. Other interlocking puzzles that grew out of the Kumiki tradition include Burr puzzles and Chuck puzzles -- both difficult wooden puzzles that form artistically geometric shapes.

In 1989, amateur French-Canadian inventor Paul Gallant made the first 3-D jigsaw puzzles with cutouts of polyethylene foam coated with painted paper. The foam pieces were light enough and made tight enough connections to support towering structures and accurate models of medieval castles, Alpine villages and hundreds more creations. The company Gallant founded in 1991 became so successful that his factory was churning out 30,000 3-D puzzles a day to keep up with holiday demand [source: DePalma].

As any experienced puzzler will tell you, there is no quick and easy way to master 3-D puzzles. Like any worthwhile pursuit, it requires lots and lots of practice and experience with a wide variety of puzzles. Puzzles also require a certain kind of intelligence. It's no coincidence that some of the best puzzlers are engineers or computer programmers -- methodical problem-solvers who can think mathematically and sequentially.

That said, many puzzles hinge on a "secret" that, once revealed, makes the riddle a whole lot easier to solve. In 1981, just a year after the Rubik's craze hit the U.S. and England, a 12-year-old British schoolboy named Patrick Bossert circulated a small leaflet called "You Can Do the Cube" that claimed to reveal the secret moves behind solving the wildly popular puzzle [source: Rubik's]. The mini-book, which quickly sold 1.5 million copies, helped create the lingo that Rubik's fans still use today.

Rubik's now has a website called You Can Do the Cube where beginners and frustrated old-timers can learn Bossert's method. Here are the first Rubik's tips and tricks:

The beauty of many 3-D puzzles is that they come with their own instructions. Those intricate Japanese puzzle boxes are meant to be opened, but only by the owner, who can presumably keep the steps a secret. The same goes for many 3-D puzzles that are really more like wooden models of ships, buildings, or animals. Paul Gallant's 3-D jigsaw puzzles -- sold under the names of Wrebbit and Puzz3D -- don't come with step-by-step directions, but do include detailed diagrams of the finished puzzle from several angles and tips for locating corner pieces and "hidden" pieces whose location isn't clear from the pictures.

For lots more information on puzzles, games and brainteasers, see the links on the next page.