by Terri Briseno
NEXT PAGE 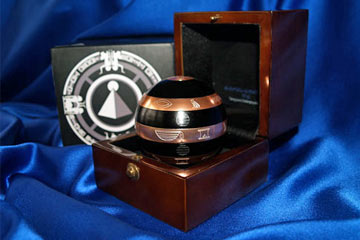 The Isis is the first puzzle in the Isis Adventure Series and players have to crack its combination to move on to the next stage in the series.
Image courtesy of Sonic Games

Action adventure movies often feature long treks full of mysterious clues before the hero or heroine finds a map, puzzle or locked box holding the keys to great wealth or for saving mankind from destruction. Indiana Jones, Lara Croft and others met their match in the form of puzzles and ciphers, some lying in wait and booby-trapped since ancient times. In real life, though, the puzzle is both the journey itself and the destination. Those who love a good puzzle do it for the exercise itself and the satisfaction of completing the challenge and finding a solution.

Many puzzles, whether math problems, word challenges or physical objects like 3-D puzzles and scrambled cubes, involve staying at home, one-on-one, man versus puzzle, while others combine an object and a quest into the physical world outside the game. The Isis Adventure, often dubbed the world's hardest game, starts as players find a way to open a round puzzle they can hold in their hands. Once inside, a key leads them on a search for a real hidden prize. It is, after all called an "adventure," so removing the puzzle itself from the box is only the beginning.

Some puzzles that came before The Isis Adventure have reputations among gamers as being just as difficult -- or even more difficult -- than Isis, one example being the book and treasure hunt known as "Masquerade," written and illustrated by Kit Williams. "Masquerade" was published in 1979 and sold more than 1 million copies. Readers studied the pictures and clues in the book and tried to identify real locations in England where they could go digging for actual buried treasure in the form of a gold bunny rabbit amulet. Two physicists found the bunny in 1982, winning the challenge and ending the hunt.

In 2005, Perplex City launched online and was similar to "Masquerade" in that it had a mystery to solve involving a complex story leading to a real location. The winner beat out 50,000 players from 92 countries and found the buried mystery cube, earning the $200,000 prize [sources: Amrich; BBC; Krotoski]. After these games were solved, "Masquerade" completely ended, while Perplex City was scheduled to release a new challenge, but as of 2011 it was still pending.

These alternate reality games (ARGs) combine a puzzle mystery with a complex storyline or ciphers and merge it into real locations and prizes for those who solve both parts -- the alternate reality and the, well, real reality. Tens of thousands of people worldwide have tried their hands at ARGs, either alone or in community with fellow players, and The Isis Adventure is well underway with a projected finish in year 2015.

But is it an ARG or something more or less puzzling? Are you game to find out more? See how The Isis Adventure is played, next.