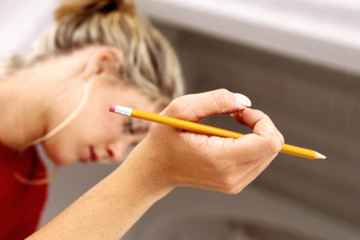 Who doesn't love a good challenge now and then? Based on the popularity of logic games like crossword puzzles and sudoku grids, it seems we really enjoy a good brainteaser. And today, a logic game that spawned in Japan is starting to spread across the globe -- the United Kingdom appears to have gone mental over it. There are two names we commonly use for the game: futoshiki or hutosiki.

The word Futoshiki means "unequal" in Japanese and that's the key to the game. At first glance, a futoshiki puzzle looks a lot like a sudoku grid. The game consists of rows and columns of boxes. The grid is a square. One of the most common layouts for a Futoshiki grid is a 5-by-5 grid, meaning each row and column consists of five smaller squares.

Your goal as a player is to fill in these squares with digits. The number of digits depends upon the size of the grid. If it's a five-by-five grid, you'll need to fill in the digits one through five in each row and column. That means the same digit can't appear twice in a single row or column.

To guide you in your digit-depositing quest, you'll see some symbols on the grid. These are inequality symbols -- also known as the less-than and greater-than symbols we use in math. These symbols restrict which digits can fit into a particular square. Depending on the puzzle, you may have a number or two provided for you to give you a bit of a start.

So how do you solve a Futoshiki puzzle?

In a proper Futoshiki puzzle, only one digit can inhabit any given square within the grid. But which digit that should be may not be apparent at first glance. You have to use logic to begin eliminating possibilities so that you can get to the final solution.

First, for any block that is on a less-than side, you know the digit in that block can't be greater than the grid allows. In other words, for a five-by-five grid, a five will never fit in a less-than block because it's the largest number possible for that puzzle. On the flip side, a one will never fit in a greater-than block because it's the smallest number possible.

You can eliminate other possible numbers based on the other blocks in that row or column as well as the placement of numbers in other rows and columns. Let's take a look at the puzzle on this page.

You'll see that in the upper right corner, we've provided the digit 4. Because of the logic symbol to the left of 4's box, we know that box must have a digit greater than 4 in it. Since this is a 5-by-5 futoshiki square, the only possible number to fit in that box is 5.

Believe it or not, now you have all the information you need to solve the puzzle. To the left of the 5, you'll see a box that has a symbol stating its value is less than that of the box to its left. That means the value in that box can't be a 3 since 3 is the largest number left on that row -- it has to be a 1 or a 2. But look at the final block on that row. Its value must be greater than the value of the digit below it. That digit, in turn, must be greater than the one below it. That means the final square on our first row can't be a 2. It has to be at least a 3. And that means we just figured out the values of the two blocks beneath as well!

Each value is there because it's the only spot in the puzzle it can fit. We can continue on from here. On the fourth row down, we know that the value of that first block on the left has to be less than the one to its right. But we already have the values of 1, 2 and 3 in that column. That leaves only 4 and 5 and since no digit in this puzzle can be greater than 5, only 4 will fit! And, because each column and row must have all digits from 1 to 5, that leaves 5 in the lower left-hand corner!

Try to solve the rest of the puzzle using the rules we've explained in this article. If you want to see the solution for yourself, take a look at this image gallery, which shows the process of solving this puzzle.

Some futoshiki puzzles will be much more complex than the one we've presented here. To solve these puzzles, you'll need to employ logic and the process of elimination. Sometimes you won't be able to determine what's in a particular box -- you may only be able to figure out what's not in it. In those cases, you should jot down the numbers you think are possibilities and return to the box later once you've solved other parts of the puzzle and narrowed your choices. And remember, just because our greater-than and less-than digits in this game are sequential, that's not always the case. Five is greater than two, after all!

To learn more about puzzles, check out the links on the next page.