How can I meet my favorite baseball team? 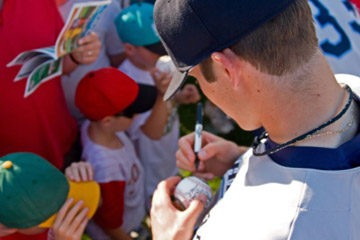 They may be your heroes but they're often quite approachable. See more sports pictures.
Hemera/Thinkstock

Professional baseball players are not always the distant, untouchable figures that they might appear to be. They are regular people (very talented regular people anyway), and they are also businessmen and employees of a team. And those teams want to build rapport with their fans and their local communities. One of the ways they do that is by offering opportunities to meet professional baseball players in several controlled, friendly settings. With a little planning, moxie, skill and time, you can actually meet your diamond heroes one-on-one and score an autograph, too.

One way to get access: Join a fan club. All teams have them, and some offer occasional fan club events, seating or special pregame player access sessions. Additionally, there are preseason team festivals, such as Detroit's annual TigerFest. Fans are invited to meet players at the team stadium or other large gathering place and get an autograph, chat or even play catch -- all for free. Charity events are very similar. They're community-building and outreach sessions where players show up to donate their time for a good cause and sign some autographs and meet fans. Schedules and information about these events can be found on team Web sites. Available players may vary from event to event and, since that information isn't always announced ahead of time, you may not know until you get there if your favorite players are taking part. So line up early.

The most likely place to meet players is at the team's home stadium. Players have to be there for 81 games a year, not to mention near-daily training, workouts, practices and meetings. Find out what time the stadium gates open, both on game days and off-days (team Web sites will have that information), and then get their early. That will give you time to meet players -- most likely after batting practice -- especially on non-game days, when they are more relaxed and have more time and energy for a chat with fans.

Here's how to get their attention: Camp out in the stands near the home team dugout.

Don't be shy about calling out players' names -- just be loud enough to be heard, be friendly, and have something interesting to say or something for them to sign and a working pen. But don't yell while your guy is at-bat -- this is their place of business and they are working, and if it's a game day, trying to get properly focused. As for pitchers, if your favorite isn't pitching that day, he'll be hanging around the dugout. If he is pitching, he'll be too busy to talk with you.

You can also often find players after the game. Catch them heading into or out of locker rooms, or even find the player parking lots if they are accessible to the public. That might be a better way to find players when they arrive rather than when they depart. After all, they'll be tired after a game and wanting to get back home. Just avoid waiting in the entry tunnels -- they're too high up and players won't hear you over the crowd noise.

Players can be found during road trips, too. Find the hotel where the team stays -- it's likely the nicest one that is in close proximity to the stadium. Hang out in the lobby a few hours prior to the game, and catch them for an autograph before they leave for pregame activities.

Remember: Be polite, know where you can and can't go at events and games and have a good time.

How does a batter warm up?
How Bunting Works
How Baseball Drug Testing Works