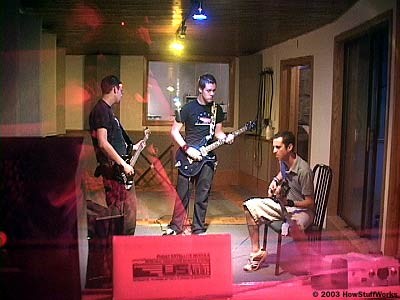 .nicofiends. during a recording session at Osceola Recording Studios.

The royalty trail begins when the song is registered with one of the three performing rights organizations mentioned above. Once a song is registered, it becomes part of that PRO's collection and is available to all of its users. Most of those users have a "blanket license" to use any or all of the PRO's music, however some users license on a per program basis and only pay for the music they actually use. (This is good for users who don't use that much music.) The PROs deduct money for their operating expenses and the rest goes to the songwriters and publishers.

PRO customers include just about anyone who plays music in a public place -- even those who play "hold" music for their business. These include television networks, cable television stations, radio stations, background music services like MUZAK, colleges and universities, concert presenters, symphony orchestras, Web sites, bars, restaurants, hotels, theme parks, skating rinks, bowling alleys, circuses, you name it -- if they play music, they have to have a license and pay royalties.

The difficult thing to imagine in all of this is how these organizations track all of that music to get an accurate record of how much royalty money needs to be paid to which songwriters and publishers. Each of the PROs use a slightly different system for calculations; we'll use the ASCAP system as an example. ASCAP uses two methods for determining performances: it either counts them or does a sample survey.

For radio performances, ASCAP does a sample survey of all radio stations, including college stations and public radio. To do this, it uses a digital tracking system, station logs provided by the radio stations, and recordings of the actual broadcasts.

For live performances, ASCAP reviews set lists provided by concert promoters, performing artists, and others. In the case of symphony performance information, the printed programs are submitted.

Others that use music, like restaurants and bars, are not surveyed and simply pay a flat rate that is distributed based on trends in local radio stations (based on the type of music).

Show me the money!

ASCAP's royalty calculations are based on a system of credits. Here is an example of how the money is calculated based on the ASCAP system.

First, some general information: ASCAP weights different factors in order to come up with a song's total "credits" and a fair royalty calculation. For example, the song is weighted based on the type of performance (theme, underscore, or promotional); this is known as the use weight. A song that is featured and sung by a recording artist on TV or radio gets more weight than one that was played as background music during a radio commercial. The licensee (radio station, TV station, etc.) is weighted based on its licensing fee, which in turn is based on the licensee's markets and number of stations carrying its broadcast signal. There is a weight applied to the time of day the music is performed (particularly in television). Music played during peak view/listener times receives more weight.

ASCAP also uses a follow the dollar factor, which means that songwriters and publishers are paid based on the medium from which the money came. For example, money paid out from radio stations is paid for radio performances. A general licensing allocation is figured for fees that ASCAP collects from bars, hotels and other non-broadcast licensees. These fees are distributed to songwriters and publishers based on similar radio and TV broadcasts of the individual songs. In other words, they estimate that restaurants and bars are playing the songs at a similar rate as the local radio and TV stations.

Here is an example of the calculation that ASCAP uses to determine the number of credits a song title has:

The total number of credits is multiplied by the shares for the song (how the royalties are split between writers and publishers). This number is multiplied by the credit value for the song. The value of one credit (credit value) is arrived at by dividing the total number of credits for all writers and publishers by the total amount of money available for distribution for that quarter. For example, if there are a total of 10 million credits for a quarter, and there have been 35 million dollars collected for distribution that quarter, then the value of one credit for that quarter is $3.50.

The final number is the royalty payment. Here is how it works:

Royalty payments are made quarterly.

These calculations are quite difficult and vary somewhat between each of the three PROs. Visit their Web sites (links are the end of this article) for additional information on how these royalty payments are calculated.

For Webcasts and other digital performances, SoundExchange was formed to collect and distribute those performance royalties. Just as in traditional media, broadcasters of digital performances of music must pay royalties to the songwriters and publishers of the music they play. Because of the Digital Performance Right in Sound Recordings Act of 1995, however, they must also pay royalties to the recording artists. SoundExchange collects electronic play logs from cable and satellite subscription services, non-interactive webcasters, and satellite radio stations. They then distribute the royalty payments directly to artists and recording copyright owners (usually record labels) based on those logs.

For more information on music royalties and related topics, check out the links below.