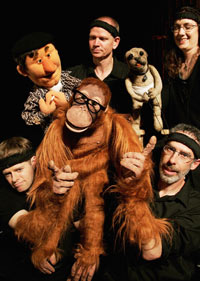 The cast of "Puppet Up! Uncensored" in Sydney, Australia
Patrick Riviere/Getty Images

More recent prime-time Muppet TV series include "The Jim Henson Hour" (1989), "Dog City" (1992-95) and "Muppets Tonight" (1996-97). The latter was an updated version of "The Muppet Show," hosted by a human-type Muppet named Clifford instead of Kermit and with a mix of classic Muppets and new characters. The same year that "Muppets Tonight" went off the air, the Disney Channel began airing "Bear in the Big Blue House," a children's TV series starring a full-body Muppet character named Bear. It lasted four seasons.

In 2001, the Jim Henson Company created a children's TV series aired in Great Britain called "The Hoobs." It ran for five seasons in Great Britain and began airing in the United States last year.

2006 marked a return to Henson puppetry for adults. Brian Henson debuted a live improv puppetry comedy show, "Jim Henson's Puppet Up! Uncensored," at the U.S. Comedy Festival. The show was also performed live in Hollywood, Scotland and Las Vegas. TBS aired the Las Vegas performance as a one-hour special in 2006 and began showing Web episodes in 2007 on TBS.com. "Puppet Up!" continues to perform in various locations, including Sydney, Australia, and at the 2007 San Diego ComicCon.

Classic Muppet characters like Kermit and Miss Piggy continue to make appearances on TV shows like "America's Got Talent" and "The Today Show" and in commercials. The Henson Company is developing a show for the Logo Network called "Tinseltown," which centers around the lives of a homosexual puppet couple. A "Fraggle Rock" movie is tentatively scheduled for release in late 2008 or early 2009.

For lots more information on the Muppets and related topics, check out the links below.

In 2003, a musical called "Avenue Q," a Generation X parody of "Sesame Street," opened on Broadway. Its original cast included several former Muppeteers, including Jennifer Barnhar, Stephanie D'Abruzzo, Rick Lyon and John Tartaglia. Initially the Henson Company and Sesame Workshop were concerned because the "Avenue Q" puppets look so much like Muppets, but eventually the companies came to an understanding. In 2004, "Avenue Q" won a Tony Award for Best Musical. Productions in other countries began in 2006, and there are currently two American productions: one on Broadway and one touring the country.