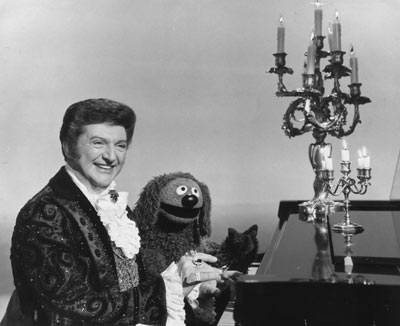 Given their status today, it's hard to imagine that the Muppets didn't begin as children's characters, or that initially Jim Henson balked at the idea of creating them for "Sesame Street." But "Sam and Friends," Henson's first TV show, was for adults. He started it in 1955 as a college freshman with a classmate, Jane Nebel (whom he later married). "Sam and Friends" Muppets included the lizardlike Kermit as well as Sam, Yorick, Harry the Hipster, Professor Madcliff, Mushmellon and Chicken Liver.

The Muppets on "Sam and Friends" mostly lip-synched to popular songs and comedy routines and parodied other TV shows. It ran for six years on a local Washington, D.C., station, and its popularity got Henson invited to perform on shows like "The Tonight Show."

During its run, Muppets began to appear in commercials for everything from coffee to dog food. Rowlf the Dog was created specifically for Purina Dog Chow commercials and was a regular character on "The Jimmy Dean Show" from 1963 to 1966. In the late 1960s and early 1970s, Henson shot several pilots and TV specials featuring the Muppets, but had not yet gotten a series.

In 1968, Joan Cooney established the Children's Television Workshop and was strongly encouraged to bring on the Muppets for "Sesame Street," the new children's education show she was developing. Henson didn't immediately accept, but according to Jane Henson, he agreed in part "because he had begun to realize that children could be a very sophisticated audience" [source: The Works]. The Muppets that Henson and his team created continue to appear on "Sesame Street" and in numerous TV specials.

ABC passed on the "Muppet Show" pilot, but Henson struck a deal with ITC, a division of the Associated Communications Company. The show was shot in London and syndicated to CBS stations across the United States. Initially, producers had difficulty finding actors and musicians to be "special guest stars," but by the fifth season, they had to pick through a huge list of talent. "The Muppet Show" was unlike anything that had been on TV before -- a variety show with skits, a storyline and musical numbers, mostly acted out by puppets. By the end of its run, people all over the world had seen it.

Due to its wild popularity, "The Muppet Show" spawned three movies while Henson was alive: "The Muppet Movie," "The Great Muppet Caper" and "The Muppets Take Manhattan" and six direct-to-video and made-for-TV movies. In 1977, Henson created a TV special for HBO, "Emmet Otter's Jug Band Christmas," based on a children's book. Its realistic characters were both traditional hand Muppets and marionettes, and much of the technology created for "Emmet Otter" was built upon in the other Muppet movies.

Henson's next children's TV series, "Fraggle Rock," aired from 1983 to 1986 on HBO. Very different from "Sesame Street," "Fraggle Rock" depicted the interactions between three "races" of Muppets: Fraggles, Doozers and Gorgs. The shows also contained segments with Doc and his dog Sprocket, inhabitants of Outer Space (the human world). "Fraggle Rock" was also a huge success and appeared in a dozen countries and languages

­ Next, we'll look at Muppet productions from the 1990s to the present.